New Horror comics you must read!

New Horror comics you must read!
by rick olivares

Horror is making a huge comeback. In comics of all media. Sounds like it isn't easy to communicate in the four-colored page, yes? 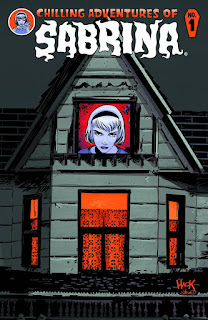 Chilling Adventures of Sabrina (Archie Comics)
Even as a kid, I thought that Archie comics were the lamest ever. However, beginning with Afterlife with Archie and now with The Chilling Adventures of Sabrina and Archie Meets Predator, and soon the relaunch for a modern audience with comics scribe legend Mark Waid and rising star artist Fiona Staples, the adventures of the true eternal teenager (not Dick Clark) have become relevant, first rate, and daring.

The Chilling Adventures of Sabrina takes what was a second rate and stereotypical character into a more complex if not frightening one. This isn’t the Day-Glo atmosphere of Riverdale but the dark, creepy, and demonic Greendale where witches have no qualms about dispatching human lives. The Ministry of Magic would have a cow each time witches and warlocks take lives and use magic for their foul means.

There are consequences when warlocks or witches fall in love with humans. To “protect" his human wife, Diana, Edward Spellman wipes his wife’s memory clean and drives her insane after which he sends her to a loony bin. Their one and only child, Sabrina, is a witch and is brought up to live with her two aunts who are also necromancers. Just in time, the father’s transgression is learned by the Coven for which he is banished into a tree. The two aunts raise Sabrina as best as they could but the teen soon falls for a human. Around the same time, Madame Satan, the witch who was betrothed to Edward Spellman before he ditches her for a human returns to this mortal coil and learns of her former lover’s actions. She first destroys the tree where Edward is banished then returns Diana’s memory but her asylum keepers disbelieve that a powerful witch is on her way to take care of her daughter. Madame Satan then ensures that Sabrina’s human boyfriend learns the truth about his girlfriend thus setting the stage for not only more drama but chaos.

Wicked, enthralling, and frightening writing by Roberto Aguirre-Sacasa who also pens Afterlife with Archie. Truthfully, the title says it all. It is chilling. The man definitely has done his research about the Wiccan arts and all its creepiness. That is a huge complement to Aguirre-Sacasa who cut his eyeteeth as a playwright and Marvel Comics author. That he is also a scriptwriter for Glee, Big Love, and Looking means he is talented. The success of Afterlife with Archie and all the succeeding books has led to his being named Chief Creative Officer for Archie Comics.

Robert Hack’s artwork that harkens back to the 1970s style Warren Comics is dark and brooding. I believe the Warren comparison is apt and bloody spot on. His use of light and shadow is magnificent. In panel three page six of the first issue, how he depicts Sabrina’s aunt Hilda and Zelda sitting atop the hill is downright creepy.

Horror seldom works in comic books. The Chilling Adventures of Sabrina, now three issues in, is going to zoom right to the Top 10 Horror Comics published and a definite must read. 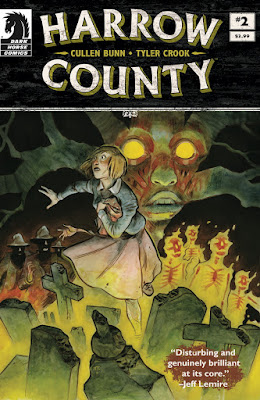 Harrow County (Dark Horse Comics)
When you think of Southern United States, you think of rednecks, steers, American Football, the NRA, cowboys, and backwoods among others. Writer Cullen Bunn, in the past several years, has made sure that you can add creepy horror stories based in the American South to that list. American Southern Gothic. I like the sound of that. Nevertheless, first with Oni Press’ surprise Western hit The Sixth Gun and now with Dark Horse’s Harrow County, Bunn has been at the forefront of the horror genre in comics.

Harrow County is a story about a rural life where superstition holds sway and an ancient evil arises. The small town once upon a team put to death a local, Hester Beck, who was accused of witchcraft. But this isn’t your typical death-from-beyond-the-grave story.

And the protagonist, Emmy, a young girl growing up in a farm, is plagued by nightmares about Beck who has in fact returned. There is nothing like a child-like innocence dealing with the unknown and unspeakable horrors.

As I previously mentioned, it is rather difficult to communicate horror in comics but Bunn’s canny writing aided and abetted by the brooding, hauntingly beautiful water colors of Tyler Crook convey the atmosphere of dread.

Some panels are frightening and they stick to your head. And in comics, that says a lot. I wouldn’t be surprised if this is eventually adapted into film.

You simply have to check out Harrow County. 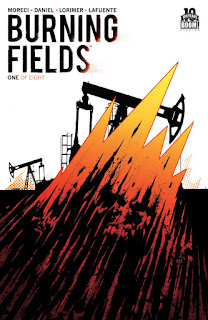 When a former US Marine is brought back to Iraq to investigate a murder, she finds herself not only in the presence of former colleagues who she has made lifetime enemies with but also an evil that lurks in the oilfields. A geopolitical horror thriller from writers Michael Moreci and Tim Daniel with art by Colin Lorimer. Dana Atkinson and her former CO, Nelson Kendrick, fly to Kirkuk, Iraq where they are joined by a local police detective Aban Fasad to solve what seem to be ritualistic murders. But danger, not only the supernatural kind, lurks in just about every corner. Burning Fields is a gripping story that reminds me of the comic book adaptation of the sci-fi mystery film Outland (starring Sean Connery) in the pages of Heavy Metal. It has that feel and that vibe. Another story that I feel could land a Hollywood production. 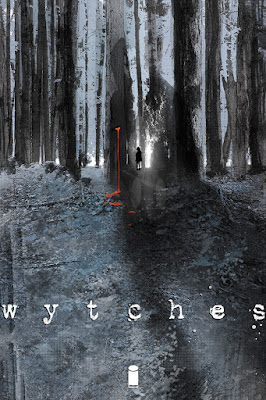 The six-issue series (supposedly the first story arc) follows the Rook family as they move to another town to begin a new life following an incident between their daughter Sailor and a classmate named, Annie. Little do they know that the cannot escape the past especially in a town with its own dark secrets. A unique twist and take on witches. Snyder, who zoomed to comic book fandom with his work on Batman. With Batman, he has shown that he is equally capable in another genre that he imbues with themes of loneliness and depression. Mix that with horror and that is quite an explosive conflict.

And after reading this you will probably not look at another tree in the woods the same way again.
Posted by Rick Olivares at 11:13 AM No comments:

Comics on artificial intelligence you must read 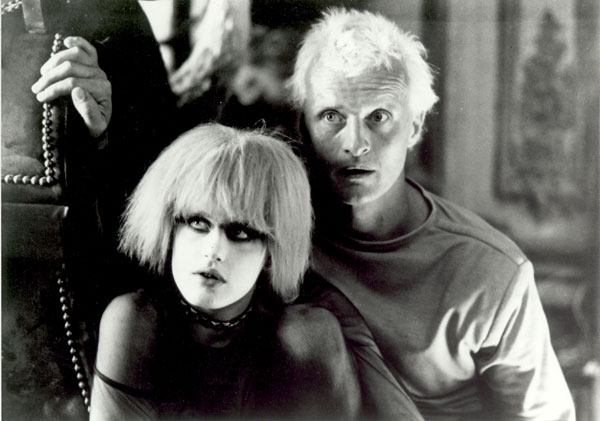 Comics on artificial intelligence you must read
by rick olivares

I remember when I first saw the film Blade Runner starring Harrison Ford in his first post-Star Wars hit, as a bounty hunter who is tasked to hunt down Replicants, rogue androids who merely want to live and not head for the scrap heap. It was an incredible story (I thought the film adaptation is far superior to the science-fiction novel “Do Androids Dream of Electric Sheep?” by the late Philip K. Dick) as it postulated about, “Is artificial life real life?”

Since then we have been treated to robot-centric books and films from Astro Boy, Terminator, Transformers, the heroic Vision and homicidal Ultron in the pages of the comic and film, “The Avengers,” Wall-E, Battlestar Galactica, and the Steven Spielberg movie, “A.I.” to name a few.

It is a fascinating topic especially now in this world of unmanned drones that bomb terrorist targets or map out the sands of Mars. There is even the debate about creating artificial life.

In the light of this, the comic book world presents four excellent treatises on this controversial subject. And I wholeheartedly recommend them. 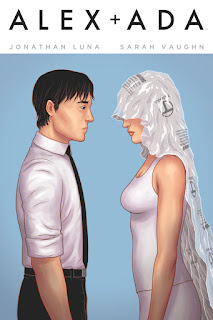 Synopsis: After Alex sinks into depressing following a break-up with his girlfriend, his grandmother sends him, Ada, a Tanaka X-5 android which is a human-companion robot that is designed for human communication or even sexual interaction. The one thing these androids do not have is self-awareness as everything is pre-programmed. In order to get more out of his Tanaka unit, Alex seeks the help of others in freeing Ada and making her more “aware” and capable of independent thought and feeling. This is however outlawed by the government and has dangerous repercussions.

Written and drawn by Filipino-American Jonathan Luna with scripting chores by Sarah Vaughn, Alex + Ada is a 15-issue series from Image Comics. The series is wrapping up in a few weeks and we are braced for an explosive conclusion as Alex + Ada are now on the run from government forces. I will say this about this series, it is thought provoking. 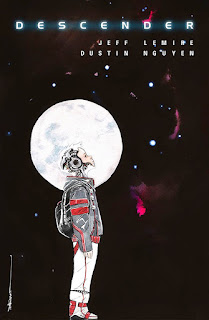 Descender (Image Comics) written by Jeff Lemire and drawn by Dustin Nguyen.
Synopsis: A story about an android name Tim 21 who was activated after 10 years in stasis. In the years before his rebooting,  the giant robots known as Harvesters nearly eradicated human life. The world since then has become an even more dangerous place with survivors having outlawed robots and the galaxy disintegrating between warriors racing. The threat of the return of the Harvesters remains. And the race to uncover the relation between Tim-21 and the Harvesters is on (as they share some similarities but not all in their programs) as an unlikely band of humans led by Tim-21’s creator, Dr. Quon and military types Telsa and Tullis join forces with Tim-21, its robot “dog” Bandit, and protector robot, Driller, to find the truth behind the extinction event. 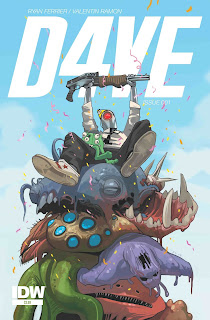 Synopsis: Years after robots overthrow their human masters, life for robots has become sedate. They curiously adapt human life and all its quirks, mannerisms, and jobs. D4VE, a Converse wearing great robot war hero now has to deal with life during peacetime. His only battles are with boredom, traffic, an unhappy wife and a rebellious and Will Smith-worshipping robot son and dealing with the monotony and tediousness of office work. But salvation for D4VE is at hand as alien invaders save  What began as a web comic via Monkeybrain is a runaway five-issue limited hit series with IDW Comics. The next series is slated for this September.

Posted by Rick Olivares at 1:50 PM No comments: