Oni Press' The Mysterious Strangers and The Sixth Gun 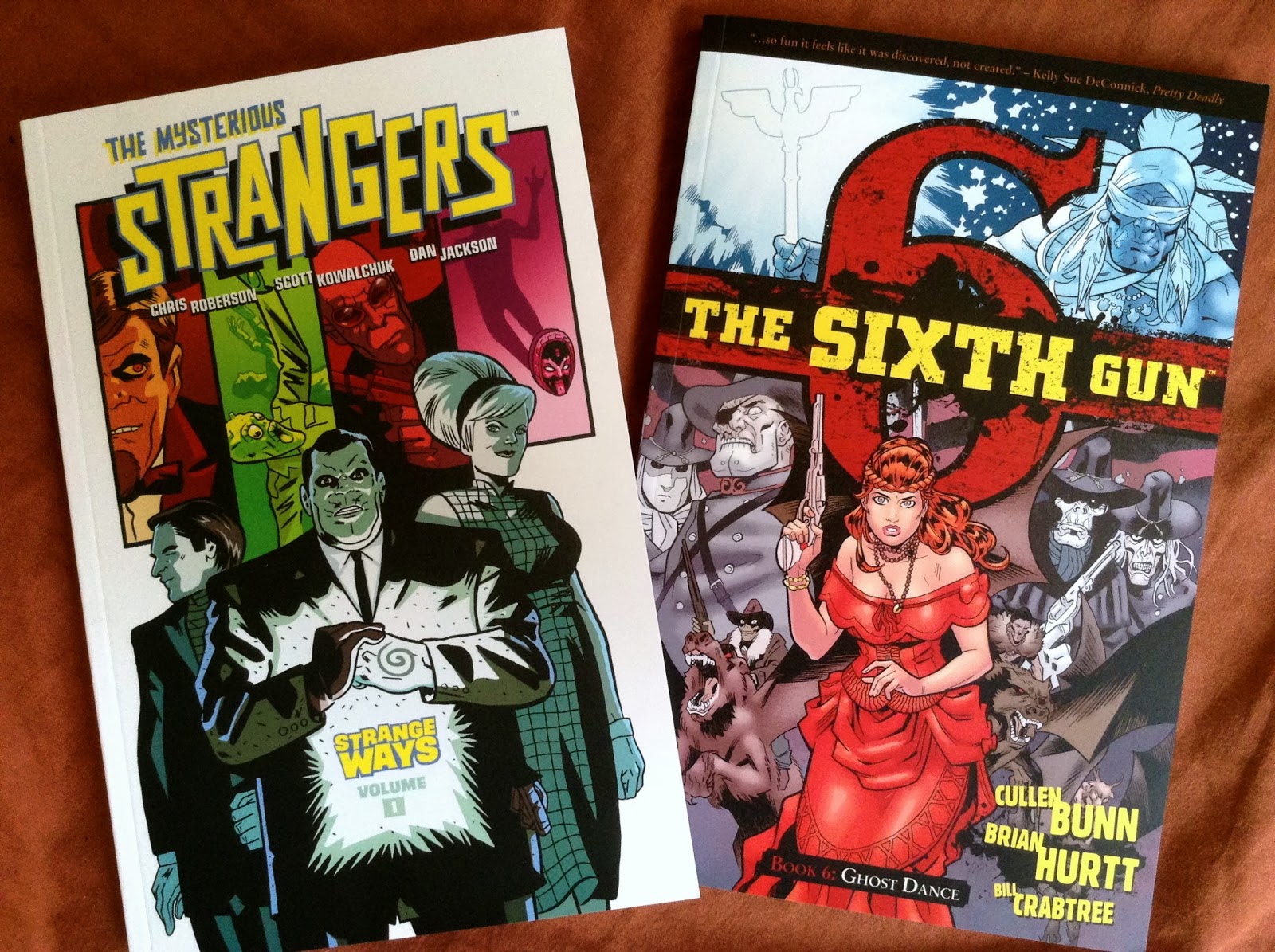 Two of my fave comic books on the racks today are Oni Press' The Mysterious Strangers and The Sixth Gun. I picked up the comic books on a whim and tremendously enjoyed them that I began to collect them.

The Sixth Gun (written by Cullen Bunn and drawn by Brian Hurtt) is a horror comic book set in the Wild West and is one of the best written and illustrated books out there. It follows the adventures of a band of strangers led by Drake Sinclair and Becky Montcrief who are bonded because of these mysterious six shooters that have the capability to change or even end the world. They are pursued by the previous owners of the guns who will stop at nothing to get them back and re-arrange the world according to their nefarious visions. The story is more than just mens shooting at each other. It's heavily into the supernatural. Especially issues #30-35 that is collected in the sixth volume of the series.

The Mysterious Strangers (written by Chris Roberson and drawn by Scott Kowalchuk) on the other hand has the feel of the Avengers of John Steed and Emma Peel. It's a spy adventure series with the Strangers led by the wheelchair bound Absalom Quince and features the lovely Verity Mills, a platinum-haired blonde lady who can manipulate time; Michael Kono who has telekinesis; and Sandoval a former luchadore who has a death touch.

It has a 1960s feel to it that I love so much. The story arcs are wrapped up in two issues before moving on into the next. I love it because it's not a heavy read but is instantly enjoyable. It's got a dash of X-Files with a nod to Charles Xavier. It has references to music (the Beatlesque Scarabs) and aliens and villainous organizations (O.C.CU.L.T.). Somehow, this series has that feel of the late Image Comic book Leave It To Chance that has a similar vibe.

I have all the issues so far but still picked up the trade paperback collecting all six issues that have been published so far.

These aren't the only two books that I love from Oni Press. I also pick up Courtney Crumrin and Toys In Warland. I have yet to try The Damned that is supposedly good.

Indie stuff. It's good for ya.
Posted by Rick Olivares at 3:12 PM No comments: 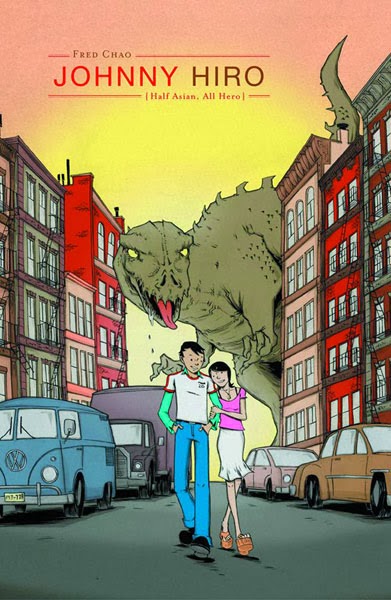 Two years ago, I picked up this trade paperback (Singapore $26.95) at Kinokuniya in Singapore. I always look for the offbeat stories and indie stuff and this seemed interesting.

The basic concept of Johnny Hiro is he is a busboy in Brooklyn, New York who has to fight businesmen who are actually ninjas and samurais, he has to save his girlfriend Mayumi from a Godzilla-like creature, and fight off knife-brandishing waiters. It's hilarious and good fun. There are elements of anime if you enjoyed stuff like Voltes V or Mazinger Z in the form of Super A-OK that is piloted by five people. Guess -- four lads and a lady. Hahaha. It's a fun look at all the Japanese stuff we grew up with. And Johnny Hiro gets to talk to Judge Judy and Mayor Bloomberg! Whatta guy!

No regrets picking up Fred Chao's Johnny Hiro (in black and white). Oh, Fred is from Brooklyn. 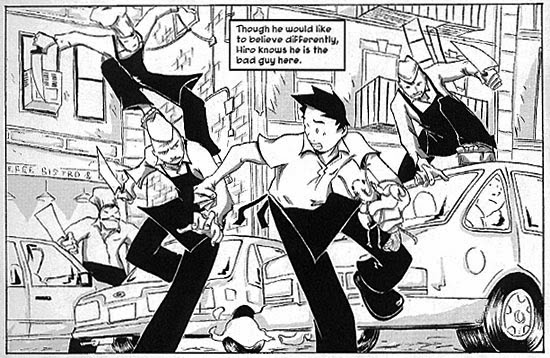 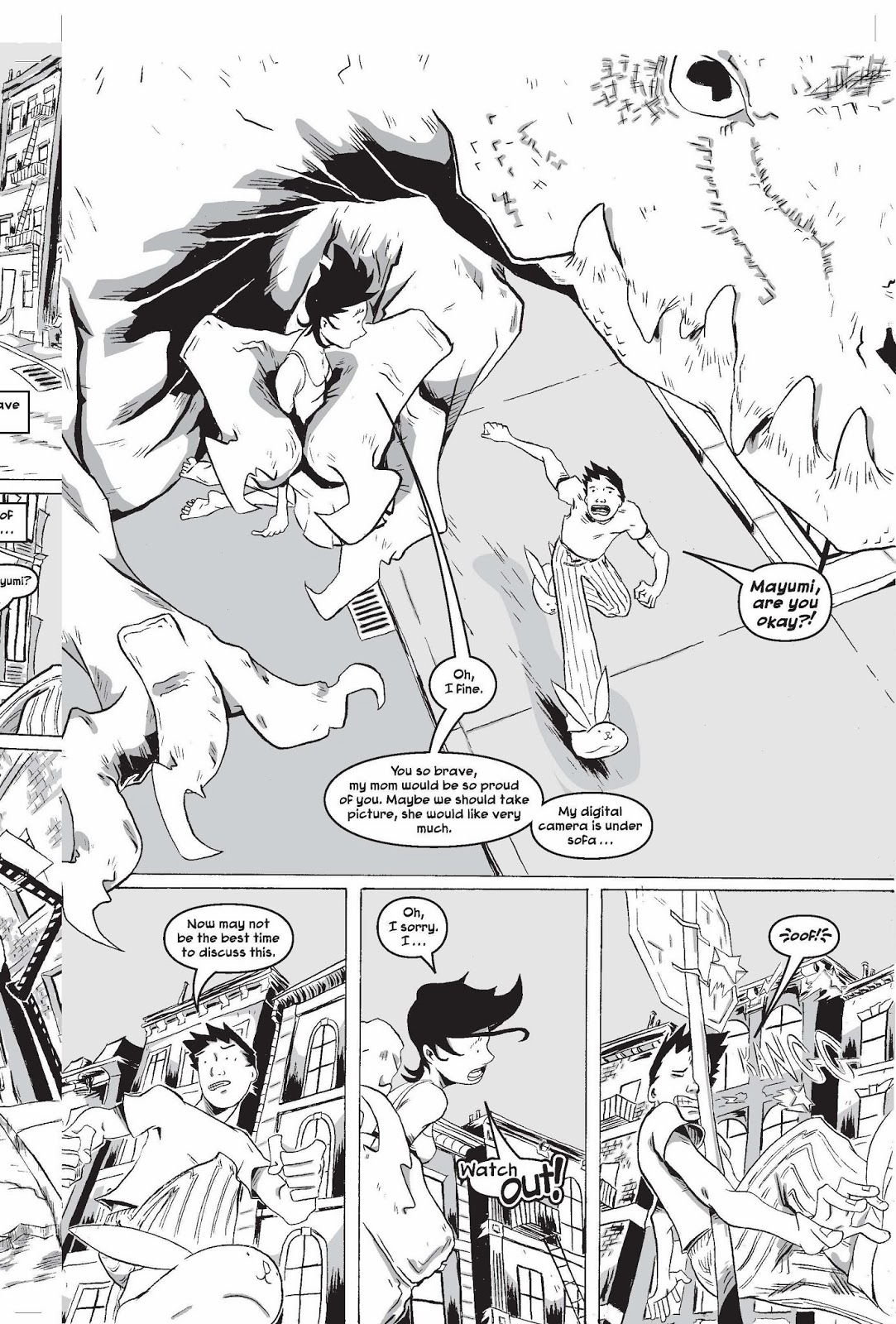 Posted by Rick Olivares at 12:54 PM No comments: 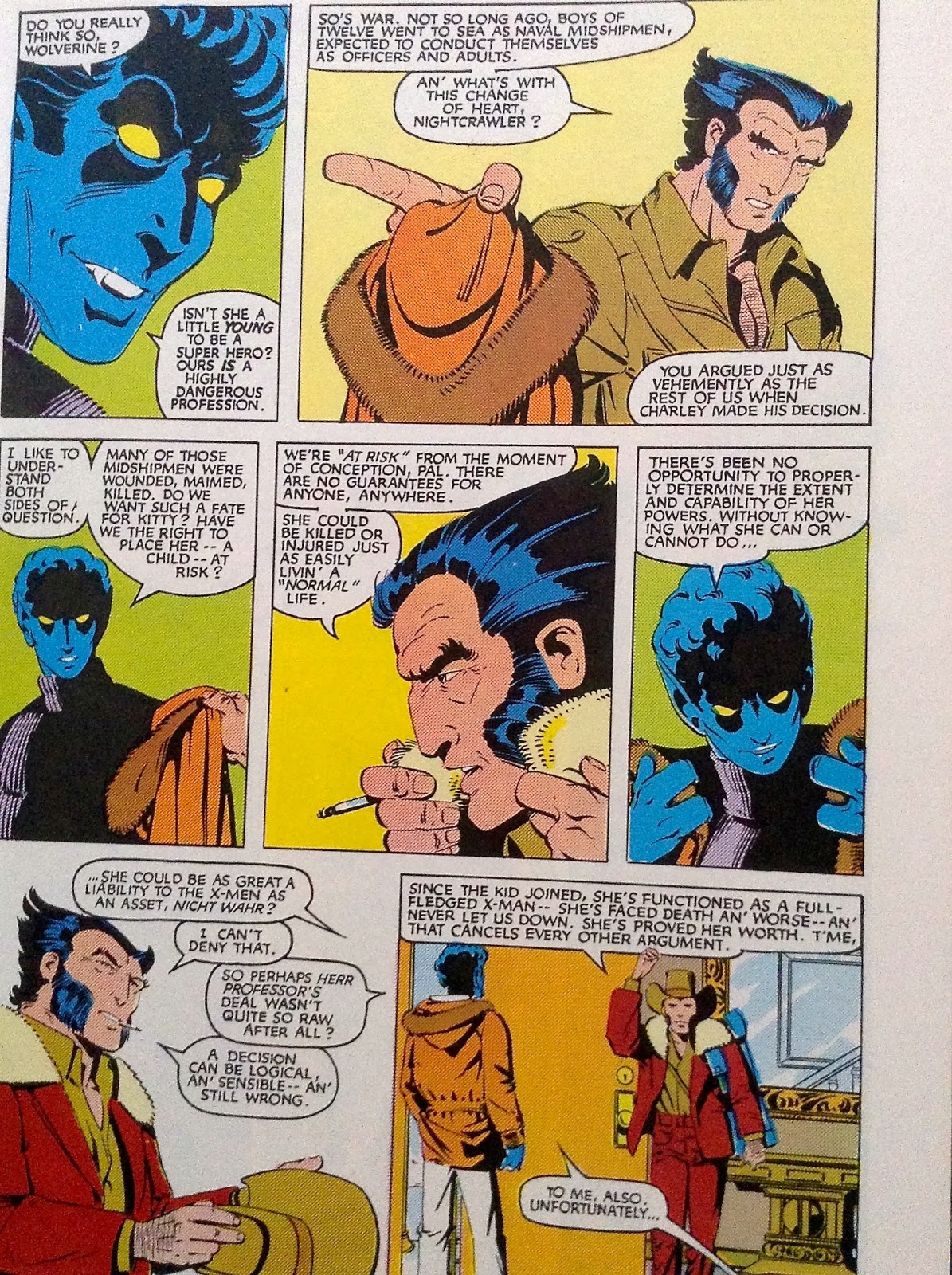 Who is the kid they are talking about? Kitty Pryde.
She was demoted from the X-Men to the New Mutants.

Yo, Bendis. You ever read this issue? I got more of this stuff.
Posted by Rick Olivares at 5:20 PM No comments:

Legenderry and The Mercenary Sea: two new books I like

Here are some new titles that I am enjoying tremendously. 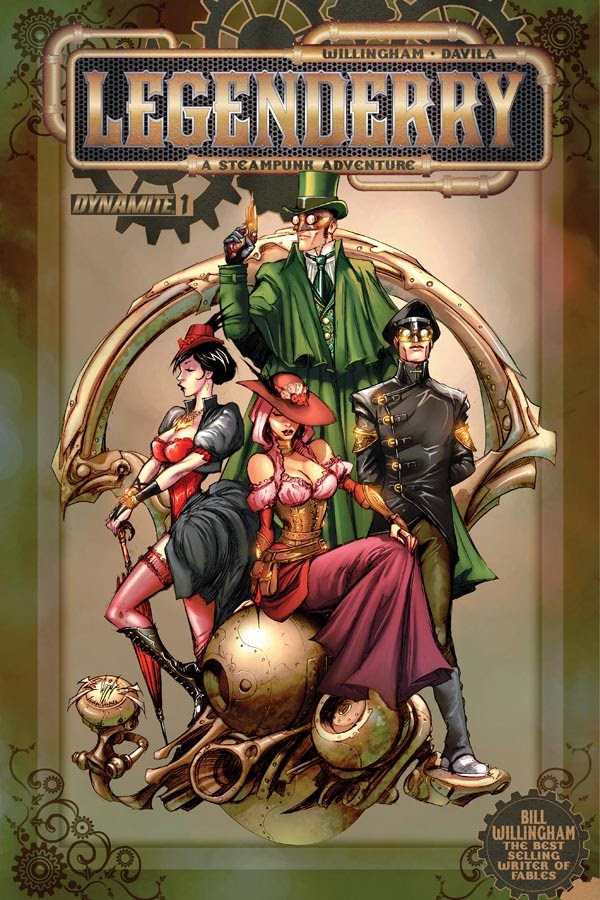 Several months ago, I asked Sandy Sansolis of Comic Odyssey if he ordered Dynamite Comics' Legenderry: A Steampunk Adventure. He said he wasn't aware of it. I was following the last New York Comicon and this was one of the new books announced that event. First and foremost it is being written by Bill Willingham of Fables fame. But truthfully, I first read Bill's stuff when he was writing The Elementals from Comico. Well, he did create The Elementals. Only it was tough finding that book on the shelves locally. Filbar's did pick it up from time to time but not regularly. My collection of 10 issues was lost during Typhoon Ondoy. Hopefully, I'll be able to complete the series that has since been collected into trade paperback format. When Willingham finding more success with Vertigo's Fables, he seemed like a natural for Dynamite's Legenderry.

You see Legenderry bands the various properties of Dynamite -- Vampirella, The Green Hornet and Kato, Captain Victory, The Six Million Dollar Man (known in the story as the Six Thousand Man), The Phantom, Flash Gordon, and Red Sonja into one storyline ala The League of Extraordinary Gentlemen. Willingham, if you're familiar with Fables, gathers some of folklore's different and disparate characters and is woven into a modern day setting. If Neil Gaiman's American Gods put the gods of myth in a modern setting this one's the opposite. It's all those characters from fables and myths put in the mythical town of Fabletown set in modern day New York City. I bought the first issue when it came out and decided to instead collect all the hardcover versions. It is one of my favorite series ever.

And that brings me back to Legenderry. It's set is a Victorian Era-style era where steam ran airships and trains. It's basically your horse and chariot fare too. Willingham finds a way to introduce the characters who receive all new backgrounds that are different from the present continuity. At the crux of it all is Magna Spadarossa who is fleeing from unsavory elements. Our heroes are there to protect her. It's a seven-issue limited series and after two issues of Willingham prose and the gorgeous art of Sergio Davila (with covers by Joe Benitez), I love it. Let's see where Bill takes this and if it warrants a sequel or an ongoing series. It's entirely possible I suppose as Bill has supplied us with a map of this Legenderry universe. 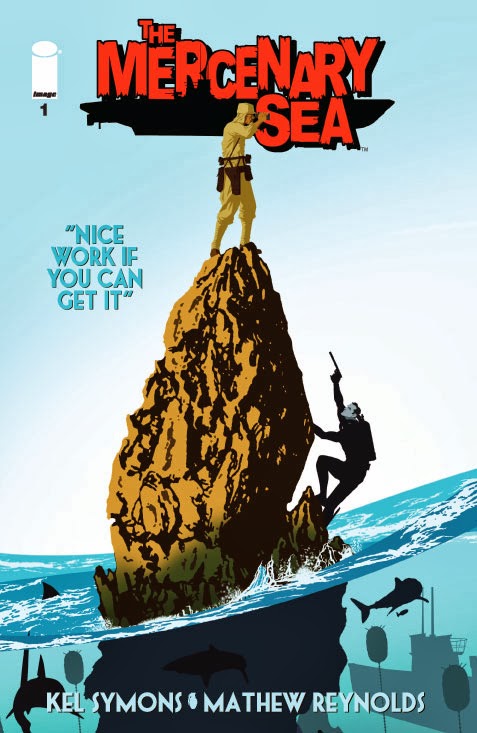 The other new book I like is Image Comics' The Mercenary Sea by writer Kel Symons and artist Matthew Reynolds. It feels like Josh Whedon's Firefly only set in the South Pacific of 1938 before the world was fully swallowed up in the conflagration that was World War II. Or maybe Han Solo and the Millennium Falcon before Star Wars.

Somehow, I get this Adventures of Tintin vibe from the book. Sorry, I really can't explain. Maybe it's the beautiful artwork by Reynolds who colors it as well. It's not Herge but it has a European feel to it.

There are these cast of characters of different nationalities in a submarine. Their purpose isn't entirely known yet. But they seem to be smugglers. Towards the end of the first issue, the villain is introduced -- Admiral Shi Tang (not sure if he's Japanese though). This brought back memories of that television series Baa Baa Black Sheep, the mostly fictionalized story of US Marine aviator Pappy Boyington and the famed Black Sheep Squadron.

The first issue introduces us to the characters including the cannibal chief of some island whose tribe enjoys popcorn and watching movies (through the old reel thingamajig).

I'm excited to see where they go with this. And I don't know how much time Reynolds puts into the art and colors but I don't mind the book being late as long as he does his stuff. Last night I was going through my collection of Caros Pacheco Fantastic Fours and he did issues #35-50. While he co-wrote and plotted almost all of it, he was only able to do pencils on about 10 of those issues. sorry but the replacement guys are just not my cup of tea. They felt like goddam fill-ins. So it goes for this. I wish the crew of The Mercenary Sea all the luck.


So many years ago, I discovered Mike Baron's and Steve Rude's Nexus and Dave Stevens' The Rocketeer. The only new independent title that I have come to love and enjoy almost in the same vein as the aforementioned two characters is Omni Press' The Sixth Gun. There are lots of good independents out there but characters? None as compelling. Yet.

Posted by Rick Olivares at 3:13 PM No comments: 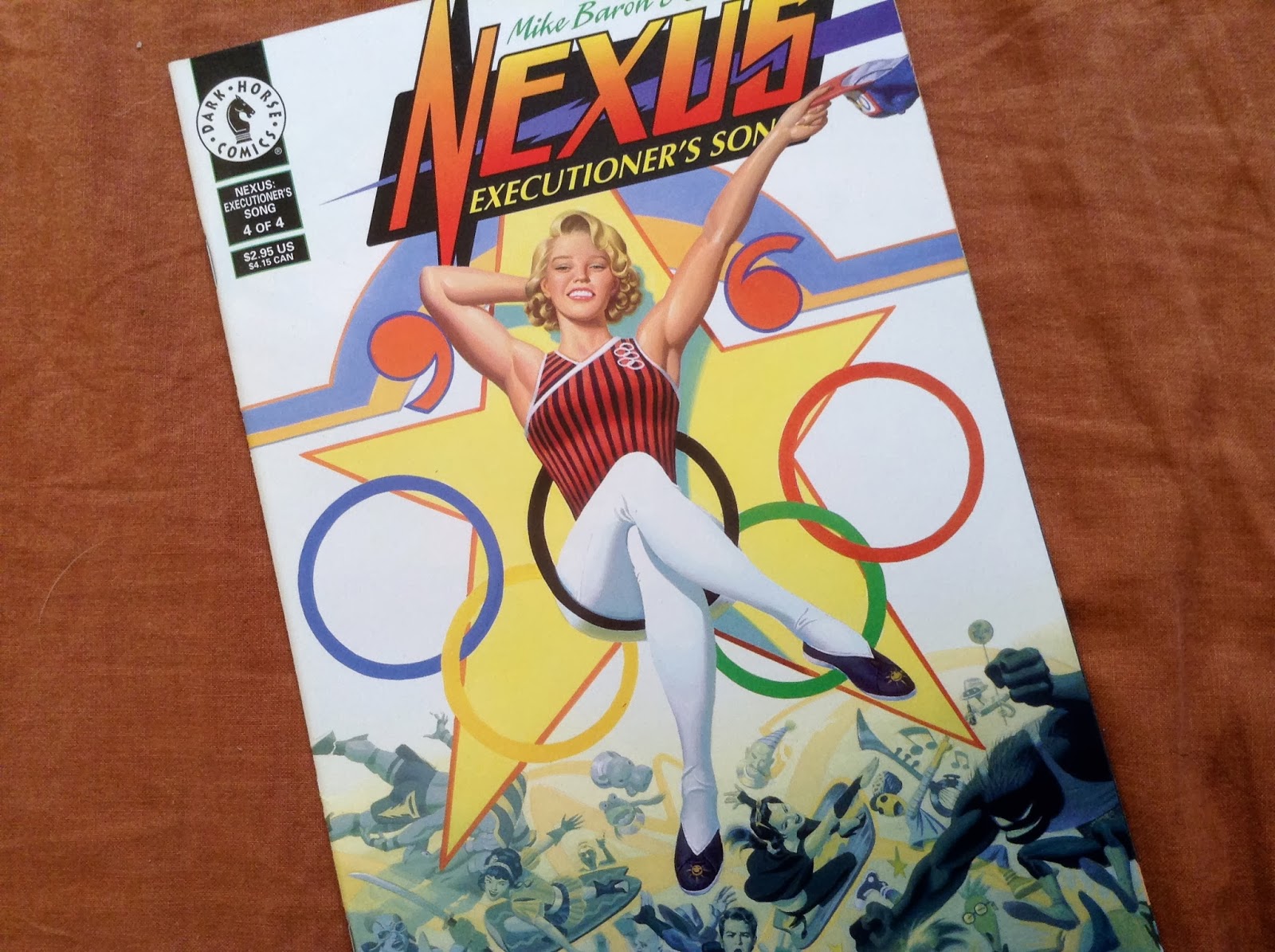 It was a thrill to have a letter of mine printed in my all-time favorite comic book… Nexus. This was printed (you're seeing the bulk of the letter as the intro was in a previous page) in Nexus: Executioner's Song #4.

If I could take a few collections with me on an island, Nexus would be the first followed by The Rocketeer and all the Alex Ross stuff. 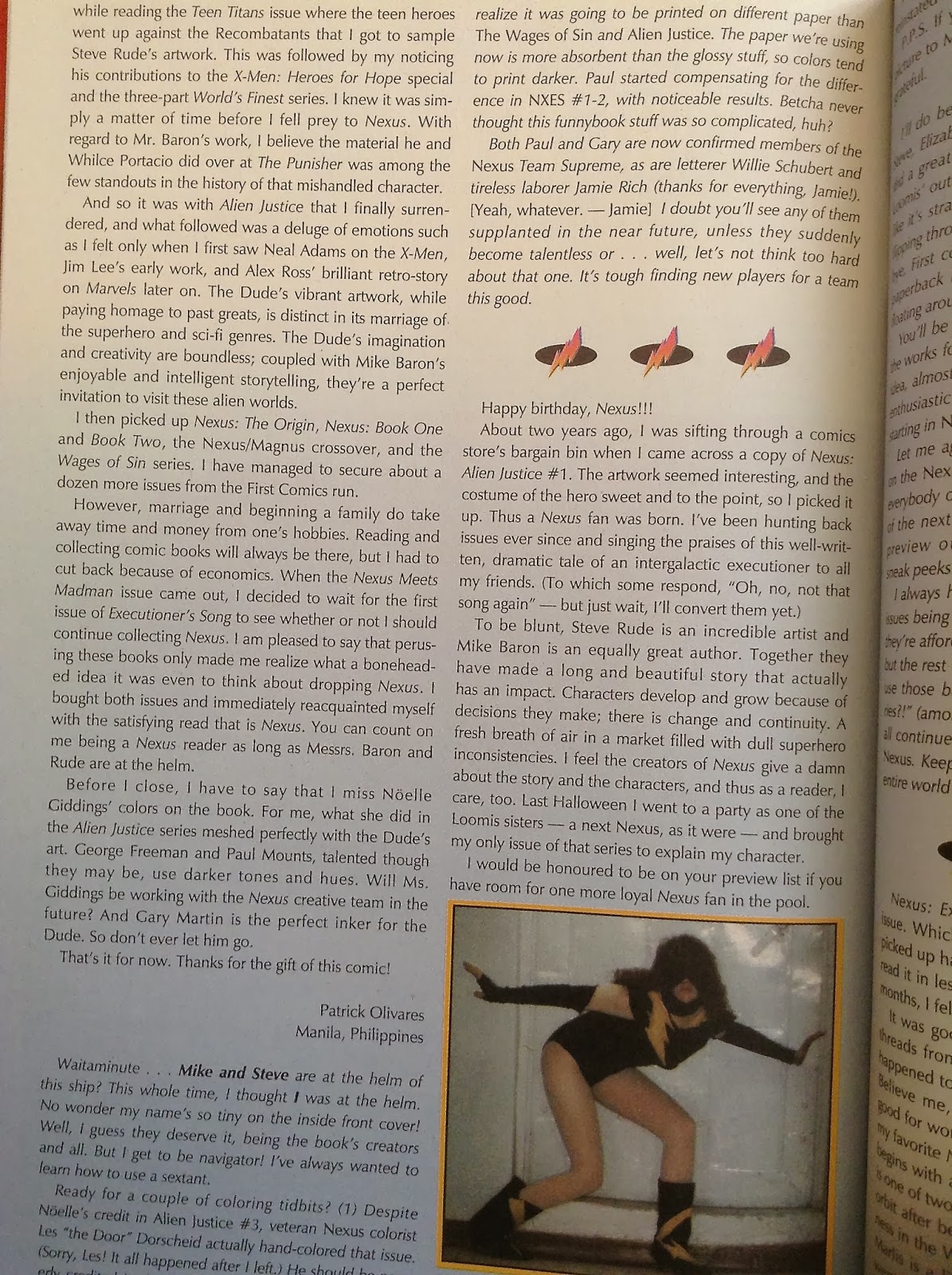 Posted by Rick Olivares at 1:21 PM No comments: 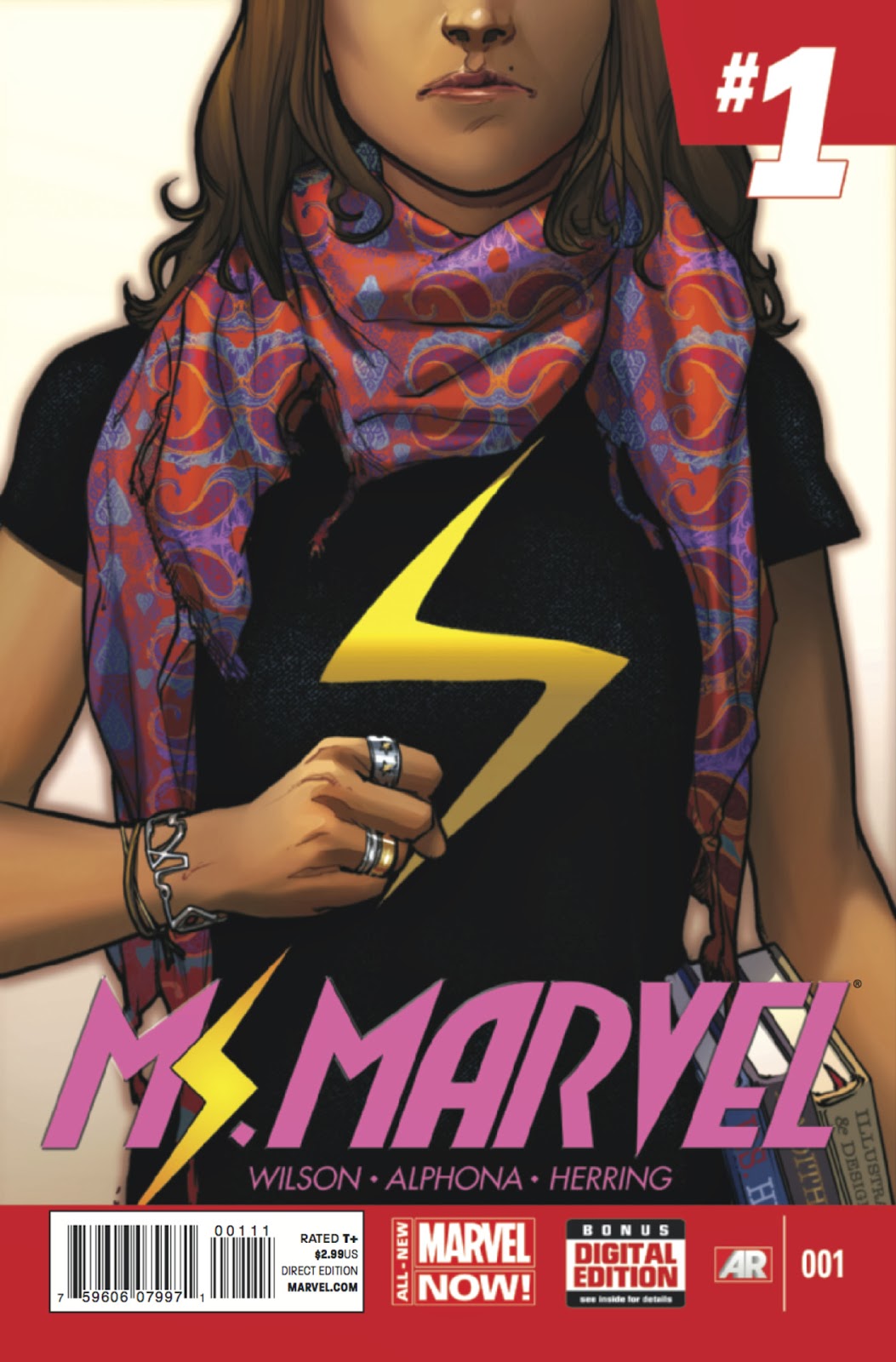 I picked up Ms. Marvel #1 not having read any of the pre-release hype but more because of its writer G Willow Wilson whose Cairo, the original graphic novel from Vertigo, is such a lovely read. I guess it was good that way as I picked it up with no knowledge whatsoever with the only expectation that Wilson would have hit another home run.

And she does along with artist Adrian Alphona and colorist Ian Herring.

So the newest Marvel superhero is a 16-year old Muslim girl -- Kamala Khan -- from Jersey City who is sorely tempted to eat infidel food and draws the Avengers in her free time. She's curious. Inquisitive. And like a breath of fresh air. Her problems are far different from when Peter Parker was a teen-ager.

Wilson's writing effortlessly flows in a large part because of Alphona's dazzling and intricate art with delightful colors by Herring. It's a delight to read through each panel while going through the intricate artwork and all the facial expressions. There's humor which is good as Wilson works through busting racial stereotypes. There are here friends and her family and you just really want to get to know them more.

The ending is the kicker right there -- what happened? Did the Inhumans' Terrigen Mists descend upon Kamala? It sure looked like it.

If I spend more than 20 minutes on a comic book that means not only am I engrossed but I am savoring each panel as if it were a morsel of food by one of the world's best chefs. And in the case of Ms. Marvel #1 featuring Kamala Khan, the flavors come out leaving you wanting more.

The sleeper hit in the vein of Fraction's Hawkeye, Waid's Daredevil, and Aaron's Thor is right here. Now who needs all these Forever Evil types for good old comic book storytelling?
Posted by Rick Olivares at 10:00 AM No comments: