Got my copies of the Filipino translation of Batman Year One 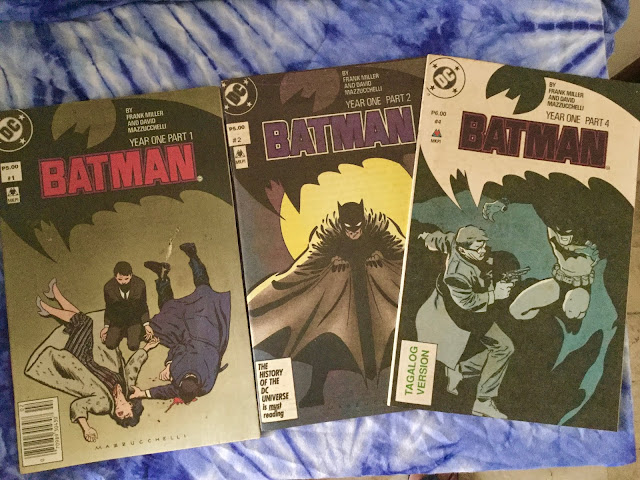 Never knew they had this... a Filipino translation and black and white to boot version of that great Batman Year One arc. It's incomplete but I'll take it. 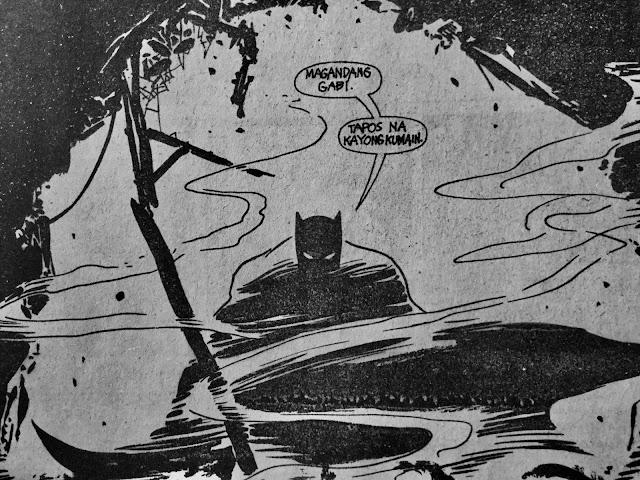 Posted by Rick Olivares at 11:06 AM No comments: 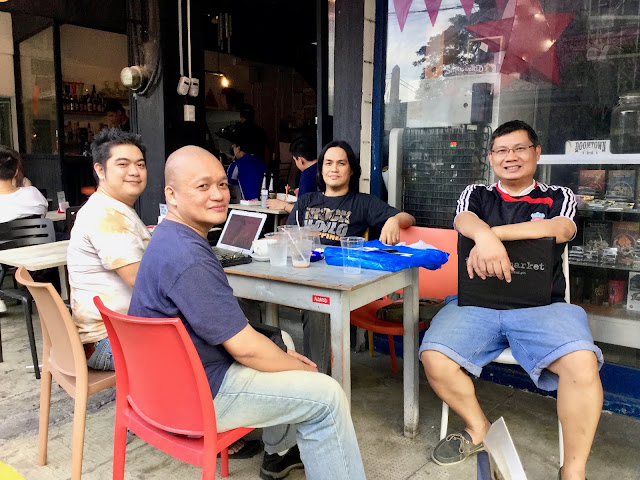 Second meeting of 2017 for our re-formed Kressh gang. Gearing up for the second volume of Pariah Comics. At the Appraisery at Cubao X.
Posted by Rick Olivares at 10:34 PM No comments: 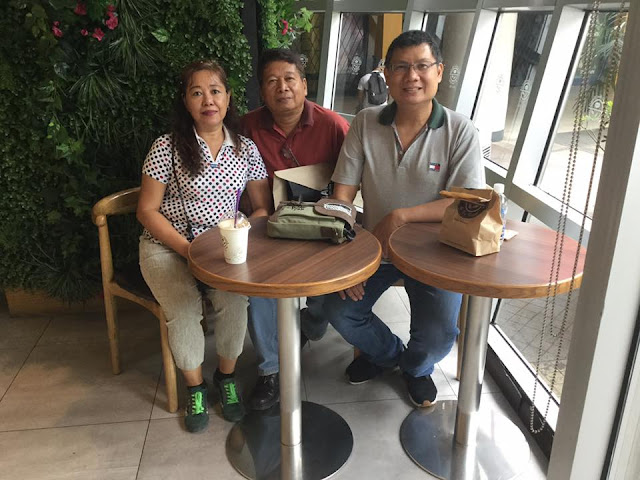 After a year's delay, we're back on track to finish Ang Ilog, that period fantasy-horror piece we began publishing in 2015. Met up with Tito Rey Asturias to discuss the layouts and thumbnail sketches for the first six pages. In this story, the worlds of Lawin, El Vengador, and Gabriela intertwince as they face a common foe.

The four issue should be out before the Summer Komikon. 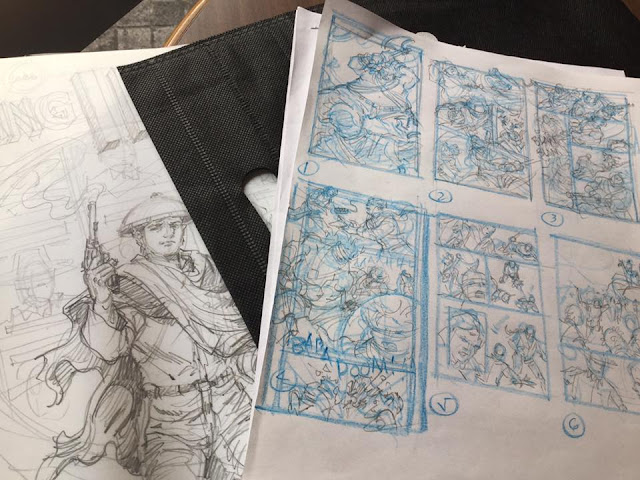 Posted by Rick Olivares at 4:11 PM No comments: 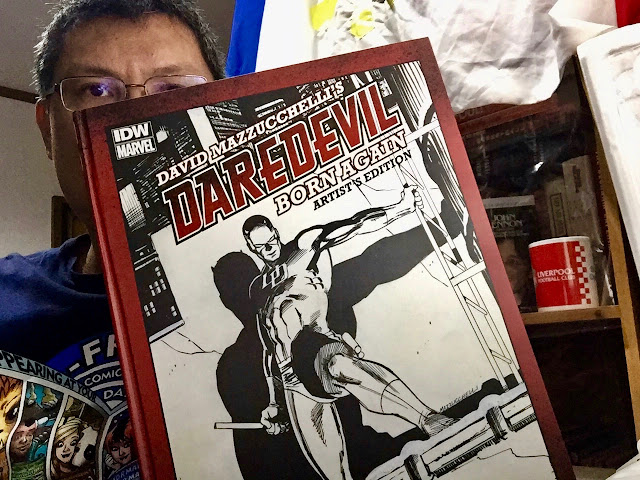 Finally got one of my favorite comic book stories ever (not to mention titles ever)... Daredevil: Born Again by Frank Miller and David Mazzuchelli. Have the original issues, the first print trade paperback, and now this Artist's Edition. Am a happy man.
Posted by Rick Olivares at 6:27 PM No comments:

What comics am I working on?

East of the Sun West of the Moon prequel Part 2
In which the crew of the Iceblink Bluff meets up with Antoine de Saint-Exupery who points them in the right direction in recruiting Charlie Durand and Anton Robichaud in their quest.

Ang Ilog Book Four
The penultimate chapter of this period story. Lawin and Tok Teban battle the giant executioner Jaramillo only to learn that the zombie hordes are pressing towards the town of Capas. El Vengador and Gabriela marshal the local constabulary that is fleeing the undead.

In the planning stages.... Mountains of Fire.

Save for Mountains of Fire, the other three will be out before April.
Posted by Rick Olivares at 9:56 PM No comments: 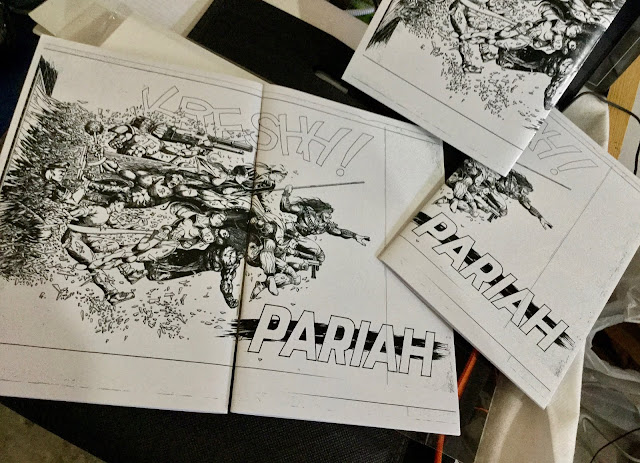 In early 1992, with some fellow comic book fans who frequented the old Filbar's New York , Cubao branch, we put up a group with the intent of producing a local comic book.

Well, we encountered many problems along the way that totally derailed the publication of this. twenty-four years later, we put PARIAH (from Kressh Comics that is a different imprint from my personal Eikon Komiks) out.

Now all these years, I kept almost all the work we did. But during Typhoon Ondoy that saw mass flooding and my house under water, I lost way too many things. I thought I had lost the Pariah files. Well, some of them are missing but 1/3 of them I found while moving houses this Christmas. Flush with inspiration, I put the comic book anthology together and decided to give this to me colleagues as a Christmas gift. The surprise on their faces is worth everything. Am just glad that it's out.

Pariah was inspired by that chapter from the Daredevil Born Again arc while Kressh was taken from that sound effect that Daredevil scribe Frank Miller used in its pages (as well as in Sin City).

The cover was laid out by our then art director, Gerry Alanguilan, after which all the artists pencilled their own characters. It went back to Gerry for inking. His Timawa was supposed to be a part of this anthology but when we stopped production he went to Alamat.

The stories -- as they were originally written -- have this Vertigo-ish spin on them. The pages were laid out exactly in the cut and paste style that we did back then (not knowing any better).

We open with “Kiss Your Protons Goodbye” by yours truly and Sandy Gonzaga that explores growing up with that unfettered imagination. Ariel Atienza follows that up with “Shadows” that is about chance meetings that could develop into something. Or not. Mark Del Rosario illustrates a tale about a man’s descent into madness and who believes that Monday is put to get him. I put words into this painted tale that is obviously titled, “Mondays”. And lastly, there’s “The Rain and the Overpass at Two O’clock in the Morning” by writer Richie Ramos with art once more by Sandy Gonzaga that’s about mending fences.

We aren't putting out massive numbers of these (you can purchase them at Comic Odyssey Robinson's Galleria). Just a few. However, just the same, Pariah Vol. 2 will be out in time for the Summer Komikon.

We won't be late. 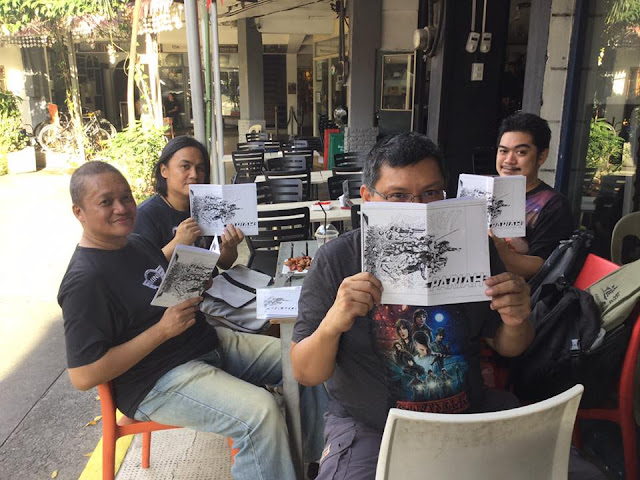 Posted by Rick Olivares at 8:20 PM No comments:

The challenges of collecting comics in 2017 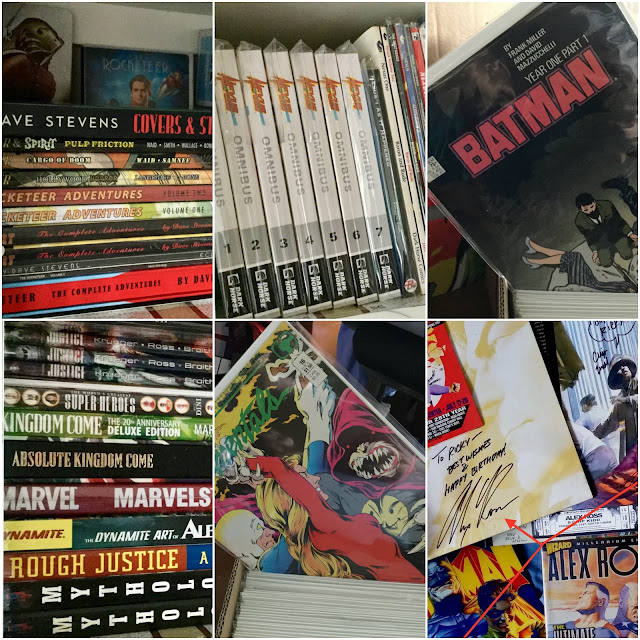 The challenges of collecting comics in 2017
by rick olivares

Two days before the end of 2015, I purchased my last comic books for 2016 – a trade paperback of the Marvel Mangaverse (that came out years ago), Supergirl: Being Super, the Mercenary Sea #1 (second print), GI Joe #1, and Optimus Prime #1.

I loved the work Marvel did with its Manga-inspired line and getting the trade was an enjoyable experience all over again. I love manga having read it since I was a kid (Ultraman and Mazinger Z were the first ones I followed) and it was great seeing Marvel characters get the same treatment. I also loved the manga versions of Spider-Man and Batman so anything to do with this genre is something I’m greatly interested in.

I like Mariko Tamaki and Joelle Jones’ Supergirl. They focus on the girl and not the “super”. Love the book one. Let’s see how it fares from here on.

The Mercenary Sea was a short-lived series from Image Comics that I loved. They canceled it after a few issues. The issue I got was the second printing of the debut issue.

And lastly, the GI Joe and Optimus Prime first issues following the Revolution event. Interesting stories but the art was terrible. Made it hard for me to appreciate. Striking that off my pull list.

Now that last line’s interesting because it brings me to the state of my comic book collecting.

In the last five years, I have grown more and more disenchanted with how Marvel and DC publish their comics. I dislike their preponderance for event-driven stories that are done more for shock value and sales. They have harmed whatever great stories that were done before. This wave of diversity for the sake of diversity has been off-putting for me. Of course, there are still wondrous runs and darn good books in this day and age. However, here’s how I have coped and will continue to do so.

The moment they left? Dropped it. Came back when Jeff Lemire came on board. But should the Canadian wunderkind also move on then that’s it for me for this title.

That has been the case for me in the last five or six years. The days of picking up the title through thick or thin are long over. Now, I follow writers or certain artists where they go… well, most of the time.

After I first read Kurt Busiek on Marvels, I followed him to the Avengers, Astro City, Untold Tales of Spider-Man, Shockrockets, and now, The Autumnlands.

When Jason Aaron began writing Thor: God of Thunder, I followed him to Doctor Strange, Southern Bastards, and The Goddamned.

Anything Alan Moore writes, I pick up. There was a time that anything Frank Miller wrote, I also picked up.

Anything Alex Ross co-plots and draws long term, I’m in.

More open to indies more than ever.
I think even when I first got into comic book collecting in the late 1970s, I have always tried out the independents. When I was in grade school, I got into the Elementals, Nexus, and the Rocketeer. So very early on, I had an appreciation for what Comico, Pacific Comics, Capital Comics, and First Comics were putting out. Image, particularly under the stewardship of Eric Stephenson and Robert Kirkman, kicked my love for indie fare into overdrive.

Indies provide more than alternative fare. They are usually produced by the creators for long-running sagas. Since Erik Larsen first published Savage Dragon in 1993, he’s kept at it. That’s what – 24 years running? Incredible. Although the title isn’t as popular as it once was.

The cosmic assassin Nexus was first published in 1981 by writer Mike Baron and artist Steve Rude. There have been a few issues where Rude didn’t illustrate the sci-fi character but they’re still at it (although to date they have published only slightly over a 100 issues with mini-series here and there).

Many titles have crossed over into pop culture consciousness. In fact, you might not even know that some of your fave films or television shows can trace their origins to comics.

The Walking Dead is probably the biggest one. However, people tend to rave more about the television series than the comics. And it’s the same with Hellboy and Teenage Mutant Ninja Turtles. Sin City and 300 have been massive hits in film and have also been critically lauded comic books. But 300 was a one-shot while Sin City was only good after two limited series.

Other popular titles that have been adapted include Judge Dredd, 30 Days of Night, Aliens vs. Predator, Ghost World, Road to Perdition, Persepolis, From Hell, The Crow, Timecop, The League of Extraordinary Gentlemen, Heavy Metal, Kick Ass, The Mask, The Spirit, Tank Girl, V for Vendetta, and Wanted to name but a few.

There is no shortage of good indie comics books that are being optioned for screen adaptation. Look out for Saga and Descender to cite a pair of recent indie hits that are purportedly up for adaptation.

And lastly, just read what I love.
In the past three years, I have gotten back, purchased is the apt word, old comics. Stuff I read, collected, and loved as a kid and my early adult life.

I have lost much of my collection over time to various reasons – moving houses, my mom throwing them out, theft, my selling my collection when I thought that I was done with comics, flooding and fire (yes, talk about that double whammy), my moving abroad, and to improper care.

With my recent unhappiness surrounding the direction and storylines of titles I loved growing up, I decided to get the back issues and re-collect them.

Part of the thrill my younger days was “the hunt”. In the days before the comic specialty shop, one hunted down their fave titles by going to PX stores where they sold American items including magazines and comics sold by GIs. Or one went to the magazine stands that sold comics but rather infrequently. Even the rise of the specialty shops did not make it easier. It made it harder because everyone now went to them and many titles were in limited supply.

Now it’s hunting down those old titles. And it has made collecting fun for me. More so when I land them, the feeling I get when I hold them and read them is priceless. Some I get in trade or hardcover form. But not all. The maintenance of these huge volumes is a problem. For one, the glossy pages tend to stick together if they haven’t been opened for a long time. That destroys the book. So I also like having the originals. As for downloading, am not into that. I like my collections old school where I can took them, hold them, marvel at them, and display them.

I don’t have to like everything now so for my peace of mind and a healthier wallet, I just go with that basic tenet of comic book collecting – getting what you like.