Celebrating the 25th anniversary of Aster, the first Filipino-comic book to be published abroad in the US

Celebrating the 25th anniversary of Aster, the first Filipino-comic book to be published abroad in the US

One week ago, Starfire Visuals, that studio that opened the door for many Filipino artists to work in the American comic book industry, was feted in the first SuperManila Pop Culture Convention.

In reality, there was another studio that published the first domestic based creative team whose work was produced in the United States…. CATS Studios.

CATS Studios was an offshoot of CATS Comics and Collectibles, a comic book specialty shop that was very popular in the 1990s for its line of independent comics, NBA trading cards, and toys.

On October 26, 1994, American independent comics publisher Entity Comics released Aster #1; the first of several titles that were released by the Manila--based studio.  Produced by Don Chin and CATS owner Billy Lim-It, plotted by Ronnie Roxas and written by his younger brother Jun, Aster featured the artwork of Oliver Isabedra who was then a college student at the Ateneo de Manila.

Unaware of what transpired, Aster crashes into a planet that is actually the same one where Dessa is imprisoned. Upon regaining consciousness as well as bits and pieces of his memory, Aster finds out that Dessa has not only escaped but is actively searching for the Gem of Saghal to once more power his mad ambitions.

The story draws heavily from the adventures of Flash Gordon, Green Lantern, Captain Marvell, and He-Man and the Masters of the Universe.

The buzz about Aster actually occurred months before when the ashcan edition (in glorious black and white and containing no word balloons) was released. Isabedra, influenced by then comics superstar George Perez, won over a lot of local fans for its dynamism and energy. When the actual comic came it out, it sported a cover by then-comics superstar, Jae Lee.

Subsequent covers featured other luminaries such as Marvel’s Joe Quesada and Jimmy Palmiotti, and George Perez.

Isabedra recalled a time when he spoke to Perez on the phone. “At that time, he (Perez) was about to begin his work on the cover to Aster #0 and I was so surprised that I really couldn’t say anything.”

When Aster #1 was featured in comic industry publications, Previews and Hero Illustrated, the buzz got even louder.

After the first four-issue limited series, another series came out as did others titled, Harriers and Shaiana, all featuring characters for CATS Studios’ imaginary, Fractal Universe. 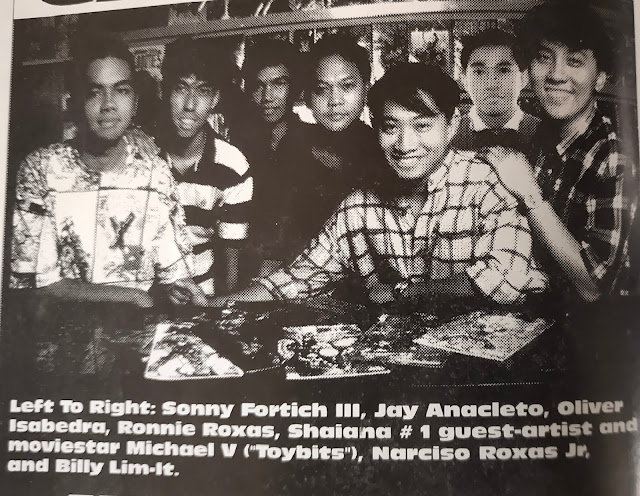 It is with CATS where Alanguilan, Anacleto, and Yu experienced their first published work.

Anacleto inked Vuycankiat’s pencils on Aster #0 as well as the latter’s work on the three-issue limited series, Harriers.

Alanguilan was the one local comic book artist who had somewhat of a buzz then. His first published work was a pin-up in Aster #1 and his first inking work on Aster #2 (the regular series).

Yu provided full art on Aster #3 (the regular series) as well as four pages of Legacy of the Dark Moon that was printed as a preview in the CATS Tour Book of 1995.

Michael V himself provided pencils for Shaiana #1 with Anacleto embellishing his work.

“Harriers and Aster: The Last Celestial Knight were my first professional work,” underscored Alanguilan. “I inked five pages or so and my inking wasn’t up to pro standards at that time.”

From 1994-95, CATS Studious was putting out three different titles at the same time; an impressive feat for a local studio. Just like that they folded. Anacleto, Alanguilan, and Yu decamped for Starfire Visuals. Isabedra claims he has no idea why it suddenly stopped. As he was already working in an advertising agency, he was too busy to lament its passing.

CATS Studios put out a total of 14 comics in a two-year span. The first ever Aster comic went through a second printing. That is an indication of how well it did. The covers for all 14 comics published saw variant covers that were color coded, foil stamped, and chromium. Not bad for a local studio.

In 2011, Jun Roxas and Alanguilan planned on reviving Aster and doing a sequel. Gerry’s hectic schedule though torpedoed the plan.

Prior to Aster #1 and CATS Studios, Filipinos who wanted to work on American comics had to either go to the United States or work on material provided to them by foreign creators. Aster saw the entire creative work conceptualized and produced by a wholly-local crew.

Today, there are dozens and dozens of homegrown talent working on American and even European comics. Anacleto, Alanguilan, and Yu are modern day superstars.

Aster might be largely forgotten by today’s fans, but it deserves more than a footnote in Filipino comics history. It was for a brief moment, a guiding star in the celestial firmament.

Posted by Rick Olivares at 6:52 PM