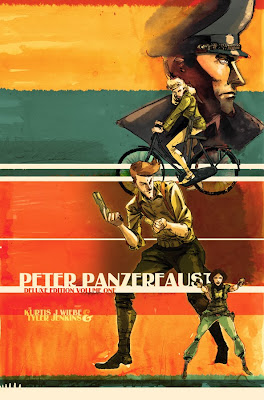 As a war buff and fan of history, I picked up two "war" comics books with a revisionist bent -- Avatar Comics' Uber and Image Comics' Peter Panzerfaust.

I picked up the first issue of Peter Panzerfaust on a whim. I had a little extra money to spend and with my shift to more indie comics, I took a chance on the title despite not knowing anything about it all.

By the first issue's end, I was... er, forgive the word... hooked. Imagine Peter Pan and all the characters from the story set in France during World War II. All I can say is -- it's a brave new world.

I never read J.M. Barrie's writings and believed the character to be a Disney creation until I was in my college years. And I have to admit that I still haven't read it to this day. I saw the movies and the plays. And aside from the original Disney cartoon, my other image of Peter Pan was in Steven Speilberg's HOOK that I loved.

Doing my research about J.M. Barrie's character, it turns out that the Scottish writer never fully described Peter. All he wrote was he had his first teeth and he is a beautiful boy with a beautiful smile, "clad in skeleton leaves and the juices that flow from trees".

So that virtually leaves Peter to the imagination of those who read the book that first came out in 1902.

On to Peter Panzerfaust.

Peter is an American boy in France helping some orphans (the Lost Boys) fight against the invading Nazis. Just as Bill Willingham mined popular Fairy Tales for Fables, so does the creative team of writer Kurtis J. Wiebe and artist Tyler Jenkins do for Barrie's set of characters. Everyone is here -- Wendy Darling, Tiger Lily, the Indians. I can't wait for Tinkerbelle's actual appearance.

As for Captain Hook? His villainy will hound Peter and the Lost Boys all the more. In his Nazi character, he could be like Malcolm McDowell's sadistic Nazi officer role, Captain Von Berkow, in the 1979 film The Passage. Maybe even more and that leads to more explosive confrontation between him and Pan.

After the first issue, I didn't pick up another as I decided to wait for the trade version. And boy, I am glad I did because the Deluxe Edition (collecting the first 10 issues in hardcover format) that came out today Wednesday all over the world contains the notes of Wiebe and sketches of Jenkins. Wiebe's notes made me appreciate the book more as he imputed Barrie's words and various Peter Pan-isms in all the story (and the artwork). If you ask me, the Deluxe Edition makes for a much better read for all.

I cannot honestly say where the creative team is taking this story and I think that is great. While it is quite obvious that Europe and France will be liberated from the Nazis, Peter and the Lost Boys' role in all -- as part of the underground resistance -- has to be told.

Now I am in a quandary -- do I get the individual issues to satisfy my Peter Panzerfaust fix or do I wait a few more months for the second volume? And furthermore, I have to get a copy of Barrie's book now so I can even appreciate more what Wiebe and Jenkins are doing.

But isn't that the purpose of a comic book -- to get you thinking some?

It's a great read folks.

Posted by Rick Olivares at 9:22 PM