An interview with Nanjing: The Burning City creator Ethan Young 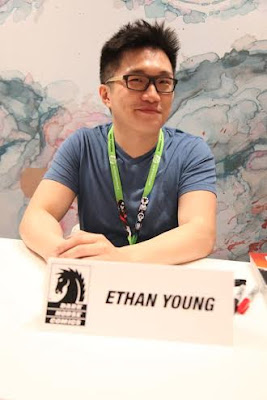 While writing my review for Nanjing: The Burning City (published by Dark Horse Comics), I conducted an interview with the graphic novel's creator, Ethan Young.

Here's the transcript of that interview:

Rick: Of WWII-era stories, there's hardly anything -- stories or film -- about the Sino-Japanese War, and Nanjing is a welcome and much needed addition to this part of history. What made you decide to create this story? Was it an easy thing to do? How much research and time did you put into this? Were you able to speak to knowledgeable folks about this?

Ethan: As a Chinese-American, the Nanjing Massacre was always a very sensitive subject for me. I learned about the Second Sino-Japanese War from my parents before I learned about Pearl Harbor in school. But ultimately, China’s involvement in World War II is largely relegated to footnotes when discussed in textbooks here in the United States. As a lifelong comic fan, I felt a 'cultural duty' to eventually craft a story about the conflict.

Creating this book took its emotional toll at times. I did research on and off for about 10 years, starting with Iris Chang’s Rape of Nanking and The Diaries of John Rabe. Nanjing was going to be my first comic after dropping out of college in 2002. After a year of tinkering, I decided to put the project on hiatus because I wasn't mature enough (emotionally or intellectually) to tackle such a sensitive subject. I held onto all my notes and reference, though. I would periodically revisit the story just to remind myself to work on it someday. After I wrapped up my semi-autobiographical webcomic, Tails, I read Forgotten Ally by Rana Mitter and The Search for Modern Chinaby Jonathan Spence, both of which delved into China’s tumultuous formation into an eventual global power.

Unfortunately, outside of hearing a few second hand stories from family members, I didn't talk to any survivors or other historians, only lots of reading. I would've loved to visit Nanjing to do more in-depth research but my time and money was very limited (my wife became pregnant midway through creating the book). Also, I hate flying and avoid it all costs if I can.

Rick: Through the Colonel, you try to somewhat temper the barbarity of the Japanese's atrocities. How did his character come about? I love how you try to imbue some of Idris Elba into his character. How big a fan are you of the actor? What is your fave Elba film? 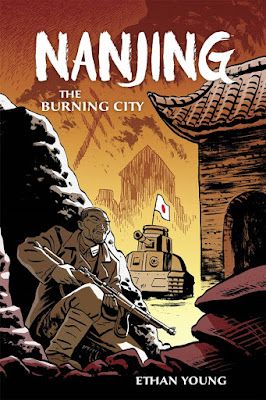 Ethan: As I said before, creating this book took its emotional toll. And many times, it's very easy to be drawn into extreme nationalism when you read about an atrocity committed against your own people. But it's more important to stay as objective, especially when you have a responsibility as a storyteller. Although the Imperial Japanese Army played the largest role in the Nanjing Massacre, the Kuomintang was corrupt and practically abandoned the city of any hope to be properly defended, which played right into Japan’s hands. So, I wanted our main characters to reflect the complicated origins of the conflict. The Captain and the Colonel are two sides to the same coin: pragmatic men of war who are morally ambiguous.

As for the Idris Elba influence, I was watching Luther and just marveled at his screen presence. I wanted the Colonel to simultaneously project both gravitas and danger. You want to believe what he says, but you don't know if you can. Elba was great in Pacific Rim, and of course everyone loves him in The Wire, but I love the grittiness of Luther. I love how his portrayal is always half-defeated, yet always resilient. I've heard nothing but good things about Beasts of No Nation, so I can't wait to watch that. And if he's the next Bond, count me in.

Rick: There are a lot of gory and horrific pictures that came out of Nanjing. Did you change any of your art panels because they were too gory?

Ethan: No, I practiced a lot of artistic restraint throughout the entire book, as well as throughout my career in general. I'm not a huge fan of gore. Occasionally I'll watch something gory and cringe a bit, but I don't indulge it. And personally, I believe our minds paint the worse pictures we can imagine anyway. That's why a lot of the violence in Nanjing is 'off-camera', so to speak.

Rick: Was this a conscious decision to render the book in black and white?

Ethan: Yes, definitely. I'm personally a huge fan of black and white comic art, even though I can do digital colors. Rule of thumb for comic art: if it doesn't look good in black and white, it won't look good, period. It also creates a more subdued tone for the book. It lends it a dramatic feel.

Rick: What has been the response to the book? What are the memorable feedback (from readers and I am curious if any Japanese readers have responded) have you received?

Ethan: The response has been overwhelmingly positive, and I’ve even had a few readers of Asian descent personally thank me for making this book. A lot of libraries and teachers have also responded well, which is great, because I think this book can reach a lot of younger readers through visual storytelling. It's easier to learn, and easier to encourage learning, when you make it more accessible, and graphic novels have the ability to do that. As for a negative response, the book's editor and Dark Horse Comics, my publisher, received angry tweets from a Nanjing-denier a couple of months back. We're actually surprised it didn't happen sooner during the promotion of the book, but it wasn't entirely unexpected. If I was a younger man, I would've been a lot more upset and vindictive, but I'm older and a father now, so I don't have time to bicker with folks over the internet, which is a pointless endeavor.

Rick: Who are your influences in writing and illustration? What comics did you read growing up and today?

Ethan: I grew up reading a lot of typical American comics, such as Batman, Spiderman, and X-Men. I became influenced by the major artists who were popular around the late 80s, early 90s, mainly Art Adams and Jim Lee. As I grew into young adulthood, I discovered more mature content, such as the work of the Hernandez Brothers and Dan Clowes. Over the years, I've gravitated more towards Asian-American voices in comics, such as Derek Kirk Kim, Gene Yang, Jillian Tamaki, and Adrian Tomine. Even if they aren't specifically writing about the Asian-American experience in every single story, there's a certain nuance that an Asian-American has in their approach: the way they craft a character's demeanor, their relationship to the outside world, their sense of cultural and physical alienation.

As for writing, I've never been a huge reader. I occasionally read non-fiction books, but I have to be in the right mood for the subject. I enjoy memoirs and essays, literature that uses a first-person narrative. An omniscient narrative bothers the hell out of me, because I keep imagining how I would display the actions visually, stripped of superfluous prose. I just get frustrated because I want words to be as economical as visuals, but that's my personal taste.

These days, I'm reading comics from Brian K. Vaughn, Kate Beaton, the artists I mentioned before, and a few superhero comics here and there. I started Amy Poehler's Yes, Please on a flight but haven't been able to revisit it since, due to work and fatherhood. Other than that, basketball articles and movie reviews.

Posted by Rick Olivares at 5:58 PM