Why I have these Funko Pops in my collection 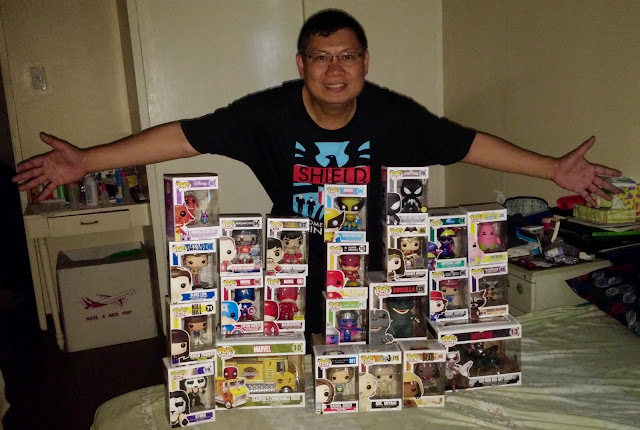 People ask if I am going to pick up a lot of these Funko Pops. The answer is no. Am just set to about a maximum of 50. Well, that may sound like a lot, right? But unlike others who go for collector's items or variants, for me, nope. I just get the characters that I really like from my fave films, shows, bands, sports teams etc.

Here's a rundown on what I have and why I picked them up.

Mushu and Cricket -- My favorite characters from Mulan! Eddie Murphy gave life to Mushu who is one of my fave Disney characters! Just had to get this!)

Slave Leia -- Such an iconic "pose" for a great character. Carrie Fisher in that metal bikini was every young nerd's fantasy. Myself included.

Gogo Yubari - What a great character from the Kill Bill films. Chiaki Kuriyama is such a lovely creature.

Sting - I love James O'Barr's The Crow. Sting, whose use of make-up was inspired by the Crow, was one of my fave characters from the old WCW. And that baseball bat of his reminded me of the Baseball Furies from that classic film, The Warriors.

Peyton Manning - Huge fan of Peyton's from his time in Tennessee to Indianapolis to Denver. No brainer for me.

Manny Pacquiao -- It is such a thrill to have this Filipino icon have his own Pop. Had to get this. Not picking up the basketball version because, well, he isn't one.

Captain America - If I am to name my all-time best ten Marvel Comics characters, Cap would be right up there along with Daredevil (my absolute number one), Cyclops, Colossus, Nightcrawler, Havoc, Rogue, and Spider-Man. Been a Cap fan since Jack Kirby's celebrated return to the title in 1975 (for the American Bicentennial) all the way to Mark Gruenwald to Mark Waid to Dan Jurgens to Ed Brubaker.

Daredevil - My all-time fave comics character. Been a fan from the Stan Lee and Gene Colan days. Both him and Nightcrawler are openly Catholic characters and I appreciate that. In fact, one reason why my eldest son's name is Matthew is because of DD's alter ego, Matthew Murdock (the other is it is the first Gospel of the New Testament). Hope to get the Yellow DD Pop, the Masked Vigilante, and the DD Netflix version!

Deadpool's Chimichangas Truck - I have to admit that Deadpool isn't one of my fave characters. But he had this appeal as an anti-hero. I think I still have all those early comics from New Mutants to X-Force that featured this Merc with a Mouth. One of the coolest Pops if you ask me.

Wolverine - Yes, I know. What's Wolvie doing here? Used to love this character until Schism and his joining the Avengers. Since then I've hated him. Still needed to get this Pop.

The Flash - My favorite DC Comics hero. Love all the Flashes from Jay Garrick to Barry Allen to Wally West to Max Mercury, Johnny and Jessie Quick. The Speed Force IMHO is one of the coolest creations when DC was good.

Rachel Green - Have had this eternal crush on Jennifer Aniston so this is a must.

Black Suit Spider-Man - Spidey is my second fave character after DD. While the red and blue costume is iconic, so is this black suit.

Wonder Woman from Dawn of Justice - Only read WW when George Perez was writing and drawing the character post Crisis. Picked up some odd issues here and there. While this is modelled after Gal Gadot from Dawn of Justice, for me, WW will always be Lynda Carter.

Godzilla - Gojira! I must have seen all the Godzilla films. I don't care how sappy some of them were, I enjoyed them! I even got the first Dark Horse comic of Godzilla (in black and white) and the Art Adams colored book.

Michonne - One of the coolest indie comics characters ever. Was a fan from the comics and I think that Danai Gurira portrays her pretty well!

Emperor Zurg - Toy Story will go down as one of my fave films ever. While Woody and Buzz are my fave characters and since I don't have them yet, Zurg will do just fine. For now.

Patrick - From Sponge Bob, one of the craziest cartoon shows I have ever seen. Love this silly character!

Agent Carter - Anyone from Captain America's comics is a fave. Plus, the television show is really good.

Rocket Racoon - Love the make-over of Guardians of the Galaxy under Dan Abnett. Rocket and Groot have since been one of my fave Marvel characters.

Ant-Man and Ant-Thony - Another of the coolest Pops ever. This is what actually got me into Funko Pops! For real.
Posted by Rick Olivares at 9:05 PM