Daredevil Season 2 review: It’s the storm before the hurricane 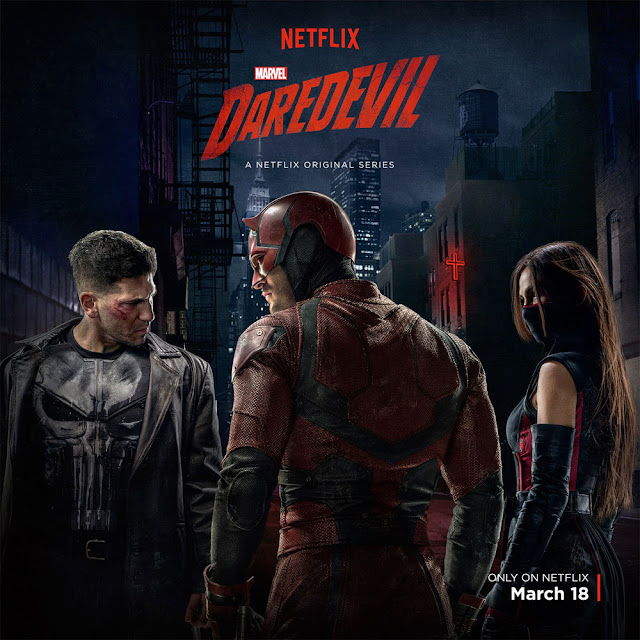 Daredevil Season 2: It’s the storm before the hurricane
by rick olivares

If the first season of Daredevil was about making a stand (to quote Karen Page in the very first episode, “either you’re with them or you’re not"), the second season is about the choices people make and their repercussions.

So if it was bad when the Kingpin was around it is worse during the free-for-all that engulfed Hell’s Kitchen. It drew in the various mobs battling for control and the two other characters whose entry have changed the equation. And make no mistake, Daredevil Season 2 is even more violent. Because the premise of DD is a more grounded hero who takes on traditional crime and not the super-powered variety, it means that there’s a lot of guns and your everyday variety — sarcastic tone here -- swords, sais, and shurikens. You know what follows.

In the midst of the carnage, and more than ever, there’s the fascinating and never-ending discourse about Matt Murdock’s alter ego of Daredevil being a vigilante. Matt/Daredevil gets into passionate discussions and arguments with law firm partner Foggy Nelson, with Frank Castle aka the Punisher, and with former girlfriend turned assassin Elektra Natchios.

As much as Nelson understands what Matt is trying to do, he is against it because his double life is hurting their law firm and his relationships with those who do not know of his extra-curricular activities.

It’s a weary look at crime and it hits home when you think about current Philippine presidential candidate Rodrigo Duterte and his so-called claim to fame as a hard-hitting “punisher” of crime in Davao City. Actor Jon Bernthal who plays Castle has had plenty of opportunity to play weary, angry, and uncompromising roles in "The Walking Dead" and the World War II film, “Fury." In Daredevil, he just kills the role of Castle. You ask for the characterization? It’s in his soliloquy with Daredevil on the rooftop and in the cemetery. It’s in jail too. As simple like he says it is, he is a complex man.

In many ways, I am glad that the show’s producers did not show the tragedy that transformed Castle into the killing machine that he is. While that has been shown in the previous Punisher films although they have nothing to do in the current continuity so a lot of the characterization is done during Castle’s soliloquy atop the rooftop,  at the cemetery, and even in jail.

Elektra is a remorseless and conscienceless assassin who struggles between her violent tendencies that was harnessed under Stick and the Chaste and her falling for Matt as young adults while trying to recruit him back into their common mentor’s fold and its ancient battle with the Hand. She calls Matt, a “shining light” in their dark world because of his belief in the justice system and the inherent goodness of man no matter what they have done in their past. And that is what drives Matt.

Elodie Yung is perfect. She’s lovely and pulls off the convincing madness to play Elektra. Such is her pull that I want to see more of her. Her distant past with Stick was amazing. So many holes to fill.

Even if you discard the comic book history of Elektra, you pull for her. You want her and Matt to find that happy-ever-after even if you know she isn’t good for him. Maybe Karen as she seemingly takes a divergent road in the television series (but you know at some point the roads will meet again and there lies the danger).

Having said that, I like how the show juggles its large cast. I love how Foggy is given more backbone here than he ever had in the comics that following the dissolution of the law firm of Nelson and Murdock, he joins Jeryn Hogarth that neatly ties in Daredevil with the Jessica Jones series.

Karen Page is given a life of her own too. Far from the failed actress and junkie in the comics that led her astray, here she becomes even more of a crusader as both Foggy and Matt’s honorable attributes rub off on her. And in an interesting twist of fate, she takes over the late Ben Urich’s job as a writer for the New York Bulletin where we find Geoffrey Cantor’s role of Mitch Ellison, the newspaper’s editor-in-chief, to be more than a prick. He does have true journalistic tendencies. For a while there, I thought he was this version of the Daily Bugle’s J. Jonah Jameson who didn’t seem like a true journo because of his prejudiced views towards Spider-Man.

With all the strong performances in Daredevil (fueled by justice) at times the show seems like a Punisher Season One (fueled by revenge) or even an Elektra (fueled by bloodlust) spin-off.

But what’s a superhero series without fighting? I’d say the fight action in Daredevil has got to be the best in the film and television series bar none. If in Season 1 the most memorable fight scene was the hallway rumble with the Russian mafia, for Season 2 it is in Episode 3 where Daredevil takes on a biker gang in a stairwell reminds me of the Stick Men animation from way back in the 1990s. You just shake your head and go, “Damn!”

That fight takes some time because as Castle sardonically said about Hornhead hitting them they get up. And in that show’s second best fight scene, it is shorter and gory -- Castle goes through a phalanx of convicts inside jail. You just shake your head but this time throw in some choice words.

In the first season, there was basically one major plotline with a few subplots and that was the long and protracted battle with Wilson Fisk.

This season two, the Punisher’s trail of blood and the return of Elektra are the two major threads that run throughout the season. There are several sub-plots that also take up a lot of screen time. District Attorney Samantha Reyes machinations behind the scenes, the return of the Hand, and the eventual return of the Kingpin for Season 3.

I had some initial disappointment in the season’s final battle with the Hand and the return of Nobu. As Matt and Elektra hole up inside a room before the battle, there seems to be an air of finality as an army of ninja mass outside. I thought this was Thermopylae in Hell’s Kitchen. This is going to be the mother of all fight scenes. Instead, they battle with some ninjas but eventually go two-on-one versus Nobu. But thinking about it later, it does make sense. Nobu wanted the duel. He needed to get back at DD for defeating him in Season 1.

Yet after all the carnage, nothing remain changed by season’d end except some players taken off the chess board. The Punisher is on the loose, the Hand is still alive, and Wilson Fisk is about to return in. And with the that cliffhanger, I believe that Season 3 will be the television adaptation of the best Daredevil comic book story ever, Born Again that will borrow some elements from another DD epic, Guardian Devil.

Daredevil Season 2 was the perfect storm. The next one will be of Hurricane levels.

Posted by Rick Olivares at 8:24 AM