Get ready to fly on those “Immortal Wings” 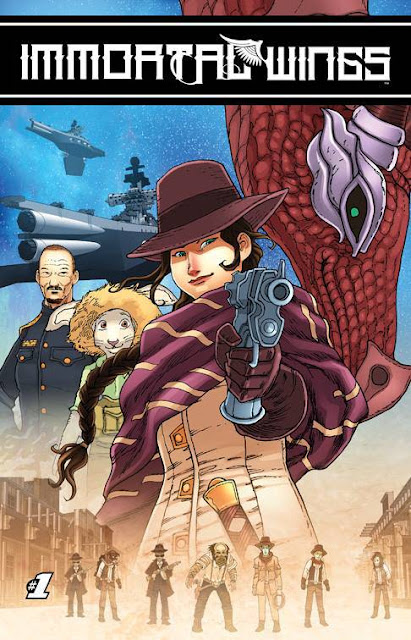 Get ready to fly on those “Immortal Wings”
by rick olivares

The new fantasy series tells the adventures of a bounty hunter named Blaze and her agent, that is actually a teleporting dragon named Gruffyd after they are hired by the Galactic Shogunate to eliminate the biggest threat to their empire… a rabbit!

According to San Juan who is a doctor by profession (a Nuclear Medicine Specialist is the exact term), “Immortal Wings” was something he first wrote when he went to medical school years ago. “I was a fan of Heavy Metal (the fantasy magazine) that I read a lot of before. When I wrote the story, I wanted to pitch it to the magazine but it never happened. Anyway, a lot has happened to the story since as he has gone through different permutations and what is in the final published comic book is far different from the original.”

A chance conversation with Espinosa who occupied a table next to him during a comics convention got the ball rolling once more. ““At first, I was thinking of publishing ‘Immortal Wings’ independently like my other comics (Callous Comics and M.O.U.S.E.) but after I looked at Rod's art samples, I thought that yeah, he’d be perfect for the story. And with Rod’s connections given his body of work, a door opened over at Antarctic Press.”

Espinosa is one of the Philippines’ brightest artistic talents. His works have been nominated for many an industry award including Promising New Talent and Best Artist during the 2000 Ignatz Awards (for small press publications) and Best Title for Young Readers in the prestigious Eisner Awards (considered the Oscars of the comic book industry) of 2002. His work on Neotopia also earned him a nomination for the German Max und Moritz Prize for Best Comic Book for a Young Audience. His known works include “The Courageous Princess” for Antarctic Press, Novotopia, and Battle Girlz to name a few.

“Rod’s advice was to make sure that we finish the first issue in terms of story and art,” related San Juan. "That was done by early January 2015 after which it was presented to Antarctic that really liked it. You can’t believe how excited and happy I was to hear them say that they are picking it up. There’s a sense of fulfillment to being published abroad and getting the world’s largest comic book distributor (Diamond Distributors) circulate your comic. As a comic book creator, it’s such a great feeling more so being posting pictures of themselves on-line with a copy of ‘Immortal Wings.’"

With the first two issues (of the four-issue arc) out, San Juan is hoping to do another story arc with Espinosa while also looking to launch a new issue of “M.O.U.S.E.” in time for the Summer Komikon.

I would like to continue ‘Immortal Wings’ with Rod if possible,” concluded San Juan. “But of course, more than that, I want people to like the story. That’s an even better feeling that they like it and collect it."

Posted by Rick Olivares at 3:35 PM