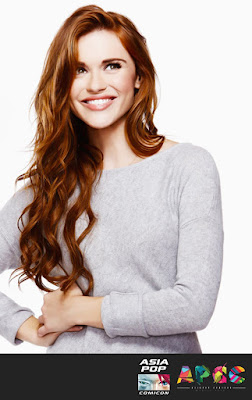 Holland Roden who plays Lydia Martin in the supernatural drama television series, Teen Wolf, was named last Tuesday, August 9, as one of the celebrity guests of the 2016 AsiaPop Comicon. The second staging of the country’s biggest pop culture event will be held from August 26-28, at the SMX Convention Center in Pasay City.

The 29-year old actress from Dallas, Texas has been a main cast member of the series that has been airing on MTV since 2011. Roden has also played supporting roles in other noted television dramas such as CSI: Crime Scene Investigation, Lost, Criminal Minds, and Grey’s Anatomy.

The announcement of Roden’s appearance comes on the heels of the stunning pullout of Agent Carter star Hayley Atwell from the comics convention due to a scheduling conflict with her new television show, Conviction.

This second staging of AsiaPop is sorely lacking in star power unlike last year where they had actor Paul Bettany who plays the Vision in the Avengers and Game of Thrones’ Nathalie Emmanuel who plays Missandei in the widely-popular fantasy series. Among comic book artists, they had renowned comic painter David Mack and Filipino-American artist While Portacio.

This year, the convention features comic book artists Mike Zeck, Ken Lashley, Billy Tan, and Portacio again. Yet all these artists' heyday was either in the 1980s or the 1990s.

AsiaPop Organizers have intimated that there will be new announcements over the next few days including a cast member from the science fiction horror series, Stranger Things that was recently shown on Netflix. Filmmaker Steven Steilberg called Stranger Things as "the best show of the year."
Posted by Rick Olivares at 11:18 PM