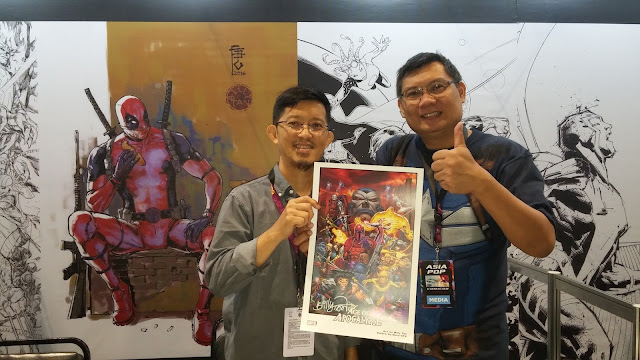 Malaysian comic book illustrator Billy Tan is in Manila for the 2016 AsiaPop Comicon this August 26-28, 2016 at the SMX Convention Center in Pasay City.

Tan discovered fantasy and comic book art only when he moved to the United States as a teenager while taking up business at the University of Kentucky. "In Malaysia we used to do traditional water color and scenery,” shared the bespectacled artist who is in the country for the first time. It wasn’t until I moved to the States and stumbled into the work of (noted fantasy art painter) Frank Frazetta that my world changed. I had never seen this type of art before. It just opened me up to a whole new world, new possibilities. Then I got into comic books where I discovered Jim Lee, Marc Silvestri, Whilce Portacio and the other guys who were all back in the early 1990s were the hot artists over at Marvel before taking their act to Image Comics.”

With his art background, it made it easier for Billy to put his pencilling to work where he was soon discovered by Silvestri’s Top Cow Studios since then, he’s drawn comics for Marvel and DC. “It is tough for me to put into words how I feel about these opportunities for me, a Malaysian kid to do this,” admitted Tan who is known as the first from his country to work in American comics. Since then another Malaysian, Tan Eng Huat also broke into the industry illustrating DC’s “Doom Patrol” in 2001 after which he has drawn a plethora of titles from the major American publishing companies.

Tan’s body of work is impressive drawing some top storylines for Marvel from Daredevil’s Shadowland arc, X-23, Uncanny X-Men, New Avengers including the Star Trek/X-Men story from 1996 to name but a few.

Tan now works out of Shanghai, China where his wife is now assigned. He has opened a studio there that is deep into production of a Chinese superhero universe. "We always see Superman saving the world. Where is the Asian hero?,” he asked. “I think it is time for Asian comics to thrive and it has. We have seen more Filipinos working in US comics and creating their own local folklore and stories. It is the same in Malaysia, Thailand, and Singapore. It is an amazing time for all of us. The work we are doing in China has been received well. We look forward to the initial published work soon."

In the meantime, Tan is in town, happily surprised that he too, has Filipino fans. “It has been a pleasant surprise to see Filipino fans come up and say that they enjoy my work. I never assume people like it so it’s great to see. Hopefully, we can inspire more people to pursue their comic book dreams.”

Posted by Rick Olivares at 8:45 AM