Before the Transformers.... there were the Shogun Warriors 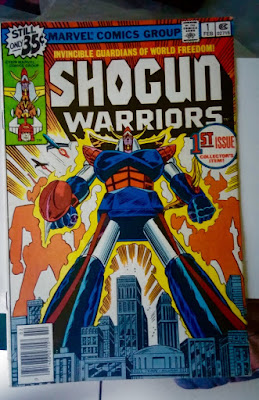 I feel so happy to be able to get this comic from my youth again. It's a team of robot warriors - Raydeen, Combatra, and Dangard Ace -- that banded together to battle other would-be robot conquerors. The story is totally different from its Japanese origins and was done purely for an American audience. But for those like me who were weaned on Japanese anime in the mid-1970s, this was still a treat more so after those cartoons were banned from local television by the Marcos government.

The comic was written by Doug Moench and pencilled by Herbe Trimpe with inks by Dan Green and last for 20 issues. This was a great time for me to collect comics as I picked up Micronauts, Alpha Flight was introduced in the pages of the Uncanny X-Men, and the "Demon in a Bottle" storyline ran in the pages of Iron Man. And not knowing what I had in this... I had Daredevil #158 that featured Frank Miller's first work on the title.

Shogun Warriors was so difficult to get ahold back in the late 1970s. The conversion rate back at that time was PhP 7 = US$1. I think I first saw this at the old Army & Navy Club along Roxas Boulevard and it cost about five bucks. That was very very pricey back in the day. I wasn't able to buy it until later when National Bookstore reprinted the first three issues but the quality was terrible.

It wasn't until much much later when I was able to get the original printing and that was during the 2003 Big Apple Comicon and I got it for one dollar at the very last hour of the con as the exhibitors were packing up.

I lost that and the first few issues to a typhoon and was only able to get it back a few weeks ago.

I cannot begin to tell you how good it feels to get it back. It isn't by any long shot one of the best comic books ever. But I enjoyed it as a kid and I still do reading it after all these years. And this was a good five years before the Transformers were developed.
Posted by Rick Olivares at 7:35 AM