Train to Busan is a high speed thriller (film review) 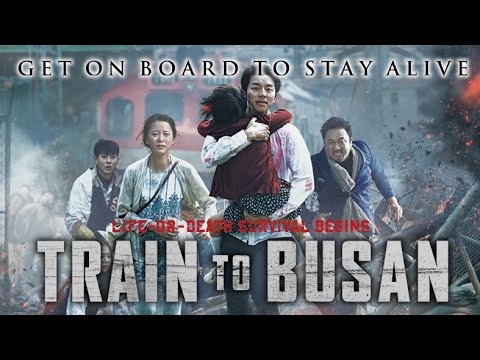 Train to Busan is a high speed thriller
by rick olivares

Just when I thought that “Fear the Walking Dead” would be the death of the zombie genre (after a boring, thoroughly annoying first eight episodes of its second season), the spin-off of the massively popular “The Walking Dead” picks up. And from left field comes this under-the-radar film from Korea, “Train to Busan” that shows us there is still life… after... near death.

"Train to Busan” is an intoxicating and powerful Korean film about commuters aboard a train en route to Busan when the zombie apocalypse hits. When an infected girl boards the train, she turns just about everyone into mindless and bloodthirsty zombies. As the train hurtles towards the supposed safety of Busan, it is at once the deliverance and death trap for the survivors as not only do they have to survive the zombies but each other.

What makes the zombie genre appealing isn’t the gore of human-eating zombies but the human element that is incredibly the wild card. In a world gone mad, it brings out the worst and the best in people. You have to fear for both the dead and the living who will do anything to survive.

It is a truism in life and death situations that you find out who you really are. One of the main characters, the young girl Soo-an (Kim Su-an), constantly reminds her father, Seok-woo (Gong Yoo), to hold on to their humanity; to do what is right. It doesn’t happen right away but his better instincts take over and rediscovers the man who he was. In doing so, Seok-woo repairs his broken relationship with his daughter. But “Train to Busan” isn’t just the father and daughter relationship. Equally compelling is the husband with his pregnant wife couple played by Ma Dong-seok as Sang-hwa and Jung Yu-mi as Sung Kyung respectively. The former is a martial arts instructor who in spite of the world going to hell is a good guy who helps others. Seok-woo takes a cue from Sang-hwa’s willingness to do what is right and to help others. And there is the young couple of Choi Woo-shik who plays a high school baseball player and Ahn So-hee who plays Jin-hee, his girlfriend. Kim Eui-sung plays Yong-suk, the self-centered businessman who will do anything to survive even if it means throwing his fellow survivors in the path of the zombies just to save his life.

Yong-suk isn’t evil. Maybe he might lack compassion but as it was said in the Michael Douglas classic film, Falling Down, he is just having a bad day.

Although the film borrows elements from “World War Z” particularly in the form of onrushing zombie hordes, “Train to Busan’s” infected are a class onto themselves. Their transformation reminds me of those werewolf films. And they become docile when the world grows dark or when they cannot see live humans.

The fast pace, increasingly heightened tension, and seemingly hopeless and impossible situations the protagonists find themselves keep you on the edge of your seat. I don’t think I have been gripped by anything zombie outside “The Walking Dead. What makes it all the more engrossing is you aren’t sure what is going to happen with every twist and turn along the tracks.

I cannot remember a time when I felt that rush, that thrill, and that gripping fear as the film’s protagonists seek safe haven from the zombie hordes. The scene where the last few remaining survivors of the train board another train with a huge horde in hot pursuit (the top view shot is amazing), I immediately thought of two things — the scene from “28 Days Later” where the character of Doyle as played by British actor Robert Carlyle runs for his life across a dale with a mass of zombies giving chase and that world-famous photo of that pick-up truck trying to outrun that volcanic cloud of ash that spewed from the eruption of Mount Pinatubo. So that scene alone from Busan tells you of the frightening odds facing every living survivor.

Watching this in a theatre full of people is an acid test for the film as you will hear people screaming, howling, and crying. When a film makes you feel the full spectrum of emotions in under two hours and makes you think of what you just saw hours after you’ve left the theatre, then you know it is a winner.

“Train to Busan” is one of those word-of-mouth films (that first filtered out of the Cannes Film Festival) that are a gem of a find. Aside from reinvigorating the zombie genre ala Danny Boyle’s magnificent “28 Days Later” (that introduced the first running zombies), this Korean masterpiece tells you there is more to K-Pop that boy and girl bands and animation. And that Hollywood doesn’t have a monopoly of good films.

Now — I know this is in contrast to the norms of safety — loosen that seatbelt and prepare for that thrilling and intense ride that is “Train to Busan.”

Here’s to surviving the experience.