Archie and pals come to screen life in Riverdale 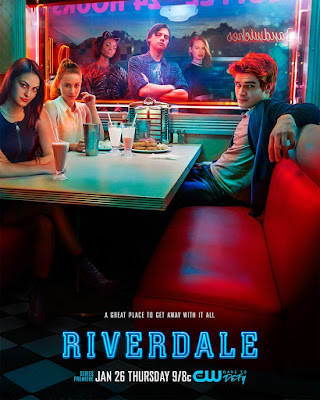 Riverdale, the upcoming new television series from the CW that is based on the Archie comics cast of characters albeit with the modern sensibility infused in the comic book version, is generating a lot of buzz.

The Archie franchise has been high profile in the last three years beginning with the comic book series Afterlife with Archie that placed these eternal teenagers in the midst of a zombie apocalypse and the Archie reboot courtesy of top creators Mark Waid and Fiona Staples. Clearly, these aren’t the trivial stories that kids asked their parents to purchase off the racks of groceries and book stores.

And to celebrate the 75th anniversary of this long-standing pop culture franchise, there’s a live action on-going series featuring Archie, Betty, Veronica, Jughead, and the rest of the gang as they figure in a more mature, darker teen drama that’s filled with secrets, affairs, and – gasp -- murder. Clearly, this isn’t the Archie comics of our youth.

Riverdale, which will premier this coming January 26, stars a lot of newcomers with New Zealander KJ Kapa in the titular role of Archie Andrews. Kapa, who hails from New Zealand is a virtual newcomer to Hollywood as he only appeared in two films that were both shown in his home country – Shortland Street and Cul-De-Sac. “Riverdale” represents his international debut.

Lili Reinhart and Camila Mendes respectively play Archie’s rivals for his affection in Betty Cooper and Veronica Lodge. Reinhart played supporting roles in films like The Good Neighbor, Miss Stevens, and The Kings of Summer. Her portrayal of Betty Cooper represents her first big and much-hyped role.

The stunning Mendes is likewise a newbie and had filmmakers scrambling to land her after seeing her perform at the New York University drama conservatory.

Cole Sprouse, who portrays Archie’s best friend, Jughead Jones, despite also being a youngster, is perhaps the one with the more impressive resume having appeared in the sitcom Friends, the film Big Daddy with Adam Sandler, and the indie suspense film, The Kings of Appletown.

And speaking of resumes, the most known member of the cast is none other than 1980s star who plays Molly Ringwald plays his mother, Mary. Ringwald appeared in popular films like Sixteen Candles, The Breakfast Club, Pretty in Pink, Something to Live For: The Alison Gertz Story, and the television series that adapted Stephen King’s best-selling novel, The Stand.

Archie Comics’ Chief Creative Officer, Roberto Aguirre-Sacasa, who cut his eye teeth writing the television musicale, Glee, and writing for Marvel Comics, is the series writer. Aguirre-Sacasa was appointed Archie Comics’ CCO after turning the company around with Afterlife with Archie.

Riverdale is produced by Greg Berlanti who produced popular shows such as Dawson’s Creek, Arrow, The Flash, and Legends of Tomorrow.

With the Archie Comics revival reaching bigger audiences, Riverdale will no doubt bring in more fans if not readers to this beloved franchise.