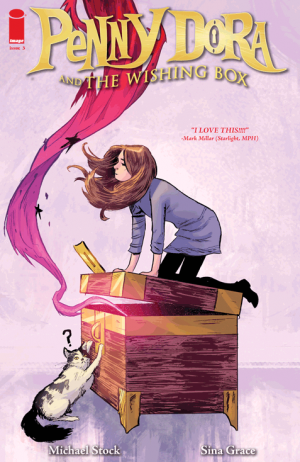 It has been said that some of the most frightening stories are those children’s tales of yore. You can throw in those ancient myths for good and horrific measure.

“Penny Dora and the Wishing Box” from Image Comics is a modern re-telling of the Greek myth of Pandora’s box wrapped in deceptively beautiful chick-lit/children’s book style art.

Michael Stock’s prose snares you just like those children’s books did all those years ago. He is sumptuously frugal yet engaging. Stock allows Sina Grace’s lovely and evocative artwork to shine through the facial expressions of the characters. Iggy the cat is a winner. I swear I will not look at a piece of ham again without thinking of Iggy.

And three issues into this title, I can say it's a wonderful read that has deep undertones that belie Grace's lovely artwork. The Greek myth of Pandora's box (or jar since it was initially mistranslated) is actually a frightening one where all sorts of ills are let loose unto the human world by a very inquisitive Pandora. Penny Dora, the book’s protagonist falls into the trap when she discovers a mysterious box left on her doorstep on Christmas Eve. Her mother orders her to dispose of the box that they think is a prank but Penny keeps it and it quickly haunts her for its asks her what she wishes. And chillingly, it even knows her name.

Penny’s best friend, Elizabeth borrows the box and misuses its to recreate her immediate world and she is warped for her troubles. Could it get any worse? We are about to find out.

Yet in three issues so far, there’s this mysterious girl in black in the background. We do not see her face although Penny takes notice of her. Obviously, she has some connection to the Wishing Box.

Like the myth that inspired “Penny Dora and the Wishing Box” this appears to be a children's comic but it is not. It writes of responsibility as well as the dangers of freedom and power. That sounds like Spider-Man territory there – you know, “with great power comes great responsibility” -- but Penny Dora reminds me more of Alice in Wonderland, Neil Gaiman’s Coraline, and Ted Naifeh’s Courtney Crumrin. And I say that puts this book in great company.

I really look forward to see where Stock and Grace take this book that has been one of the best put out in late 2014 and is one issue into this new year. Now, I can't wait to find out the identity of the girl in black.

And for mythology buffs like me, the homage to painter Frederick Stuart Church for the cover of Penny Dora and the Wishing Box #3 is priceless. 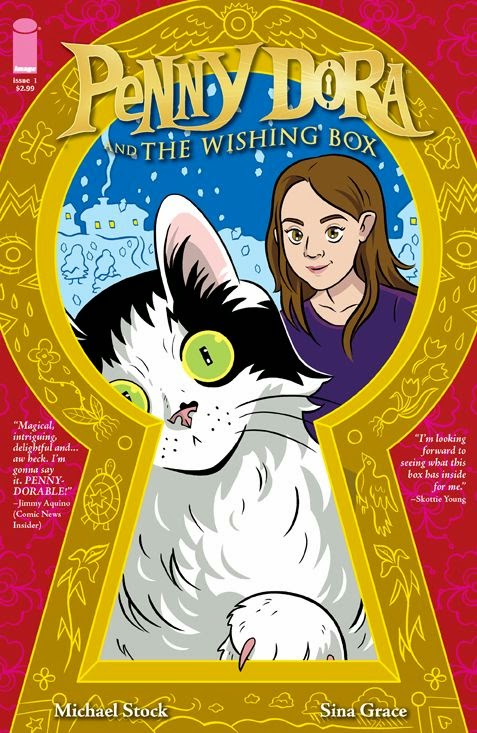 Posted by Rick Olivares at 9:41 AM