The Force is with Marvel’s new Star Wars comic 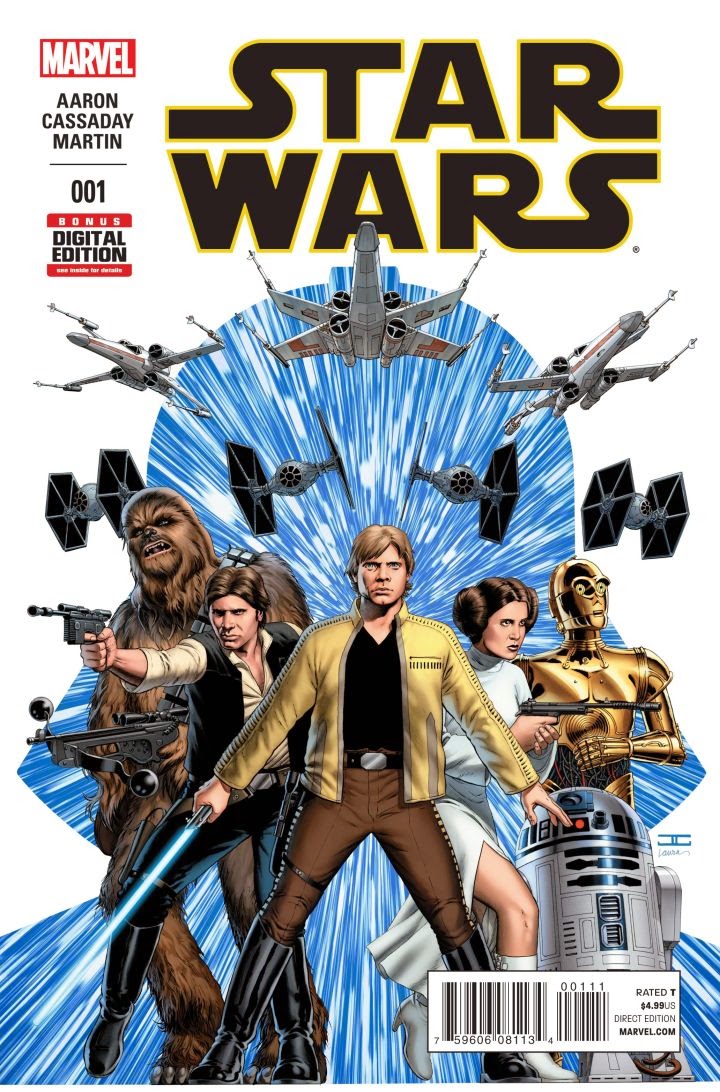 I am a Star Wars fan. I lined up for the film in 1977 and every succeeding film afterwards. And yes, I love the prequels (but not Jar Jar Binks).

My being a fan doesn’t really extend much to the other media. I read only a few of the Marvel Comics and only Dark Horse’s Dark Empire but I never collected them. Of the Expanded Universe novels, I only bought and read Timothy Zahn’s Heir to the Empire trilogy and Scoundrels as well as Dave Wolverton’s The Courtship of Princess Leia.

When Disney purchased the Star Wars franchise, I was ecstatic because it finally meant a new movie or trilogy if we are really lucky. And of course, that means new comic books. The news that the new direction was not going to use anything from the Expanded Universe left virtually all the fans of the EU unhappy. I guess this is like Star Wars fans’ version of Crisis on Infinite Earths as all that literature was chucked away like it never existed.

Truthfully, even if I enjoyed the Zahn books, I was never into the EU (but I certainly appreciate it).

For me, Star Wars was always about the films and that ill-received Holiday Special that was made for television in 1978.

And that leads me to the first Star Wars comics under the Marvel Comics banner after 28 years. And this time, I reserved a copy; and when it came out, was the first from my weekly pull list that I read. And for me, it is the comic book of the week.

I feel like I just stepped out of a time warp after reading Jason Aaron and John Cassaday’s Star Wars #1.

Quick synopsis (spoiler alert): The story takes place after events from A New Hope and before The Empire Strikes Back. I guess with the new film taking place after Return of the Jedi, it was wise to take the stories in a future setting back one rooted in its past.

With the Death Star destroyed, the Empire is gathering raw materials (and my guess is it is for the second Death Star that we later saw in Return of the Jedi). But these raw materials are hard to find and they have to deal with space pirates to acquire what they need.

Pretending to be space pirates but emissaries of Jabba the Hutt, the “new” crew of the Millennium Falcon infiltrates Cymoon 1, a heavily armed Empire base, in order to further cripple the Emperor’s war machine.

Luke Skywalker still has not mastered the Force while Han Solo and Princess Leia start to discover their feelings for one another. As for Darth Vader, without the late Grand Moff Tarkin to restrain him, he shows his ruthless side when he uses the Force to lift some Stormtroopers to literally take some blaster shots meant for him.

And like the best laid plans of men, things go awry and a raw Skywalker finds himself face to face with Vader.

Writer Jason Aaron who is just coming off some recent comic book hits with Thor, God of Thunder, and Southern Bastards, shows his uncanny ability to shift from Norse mythology/superhero-themed books to crime and suspense to sci-fi. With his first issue of Star Wars, Aaron’s writing is taut yet engaging. He captures the wit and smarminess of Han Solo, the humanity of Skywalker, and the derring-do of Leia. Not to mention the annoying oddity of C-3PO.

The best line of the book?

After R2D2 fries some unsuspecting Stormtroopers.
Cymoon 1 Overseer Aggadeen: What kind of envoy are you?
Han Solo: The rebellious kind (emphasis on adjective).

I have always been a fan of John Cassaday (colorist Laura Martin does a bang up job as well) and he is mostly able to depict some of pop culture’s most famous characters with aplomb. I say mostly because there are some panels that look kind of funky. But it’s still great. I don’t even mind it. Sans my mentioning it, it is inconsequential and does not detract from your reading.

At 34 pages, Star Wars #1 is a winner and makes me look forward to the two other Star Wars books (Darth Vader and Princess Leia) that Marvel will put out soon.

The Force definitely is with Marvel’s new Star Wars comic.
Posted by Rick Olivares at 11:53 PM