The Motorcycle Samurai: An apocalyptic western comic that goes down a fiery road 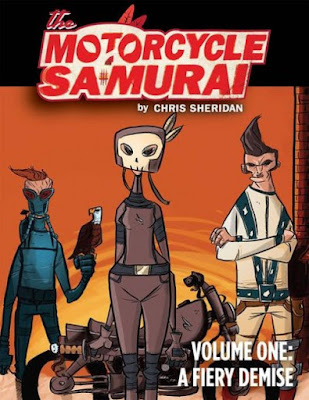 The Motorcycle Samurai: An apocalyptic western comic that goes down a fiery road
by rick olivares

If you enjoyed Mad Max Fury Road and are waiting for the fifth film, supposedly titled, “Wasteland,” that won’t happen until another year or so then you might want to check out Chris Sheridan’s “The Motorcycle Samurai Volume One: A Fiery Demise.”

Originally published digitally and now available in trade paperback format thanks to Top Shelf Productions, “A Fiery Demise” is a dangerous mix of George Miller’s apocalyptic anti-hero and the Spaghetti Westerns of the 1970s. The film analogies aside, “A Fiery Demise” stands on its own legs as Sheridan leaves room not just for one anti-hero but two. He doesn’t try to make sense out of a world where the lines between good and bad are blurred. There’s moral ambiguity but by story’s end, it’s all about doing what you can while trying to survive.

The writing is taut and inspired. It feels like you’re living on the edge. Even during the down time in the comic it is still like you’re seated next to a grenade with its firing pin pulled out.

As for the art? No doubt,  Aeon Flux creator Peter Chung would love this.

The story revolves around the mysterious rider White Bolt who transports a prisoner across the desert where some folks will stop at nothing to retrieve the captive. White Bolt is able to deliver the prisoner the town of Trouble (population: 108) that is a wild west version of the Thunderdome.

Now when you have a town named “Trouble” then it stands to reason that is exactly what you’re going to find in mad world that Sheridan creates. Especially when there are two sides that are going to war (I had to play the Destructo Mix of Frankie Goes to Hollywood’s “Two Tribes” while reading this because it seemed just right).

White Bolt arrives just in time for a boxing match between the sheriff of the town, Roy Keane (who looks like a New Wavish Evel Knievel), and a man called, “the Aussie.”

When I heard the barker’s impassioned soliloquy that precedes the fight, I am reminded of the soliloquy of Dr. Dealgood, the master of ceremonies in Mad Max Beyond Thunderdome that works everyone up to a blood frenzy: "Listen all! This is the truth of it. Fighting leads to killing, and killing gets to warring. And that was damn near the death of us all. Look at us now! Busted up, and everyone talking about hard rain! But we've learned, by the dust of them all... Bartertown learned. Now, when men get to fighting, it happens here! And it finishes here! Two men enter; one man leaves.”

Trouble’s barker has the same flair for whetting the crowd’s appetite for destruction when he calmly says, “We all know you hard working and deeply devoted people did not come here to pay tribute as if we were still whelps at the teats of that grand old cow, the queen across the sea. We bow to none, no matter their ilk, or stupid tall hat. We are here for blood. Plain and simple. And then later, maybe, well have some fireworks too. But that is for later. Now is the blood.”

Ach. But isn’t any MPF Interceptor that runs over a biker gang. White Bolt, who later allies herself with the sheriff, go up against the town’s mayor so this too has the feel of that Clint Eastwood classic, "Unforgiven.”

It’s explosive, and so is the conclusion. Yet surprisingly, Sheridan doesn’t go overboard with the violence. And maybe that is good with even mainstream comics becoming way too graphic as the creators try to top each other in showing its audience a million and one ways to die. So props to Sheridan.

The fact that “The Motorcycle Samurai” evokes a lot of feelings and many favorites from pop culture does right by me.

As for my copy of this trade paperback (that a friend got for me in the last San Diego Comic Con), it sits nicely next to that other apocalyptic western, “The Sixth Gun.” Furthermore, when creators like Jeff Lemire, Mark Waid and Geoff Darrow rave about “The Motorcycle Samurai” then you can’t go wrong.

While “The Motorcycle Samurai” might not be available locally (a copy was given away as part of this year’s Free Comic Book Day), you might want to ask your comic specialty shop or even Fullybooked to get you a copy.

The Motorcycle Samurai TPB is 176-pages long and is published by Top Shelf Productions.

In our next part, we feature a lengthy interview with creator Chris Sheridan.

Posted by Rick Olivares at 8:54 AM