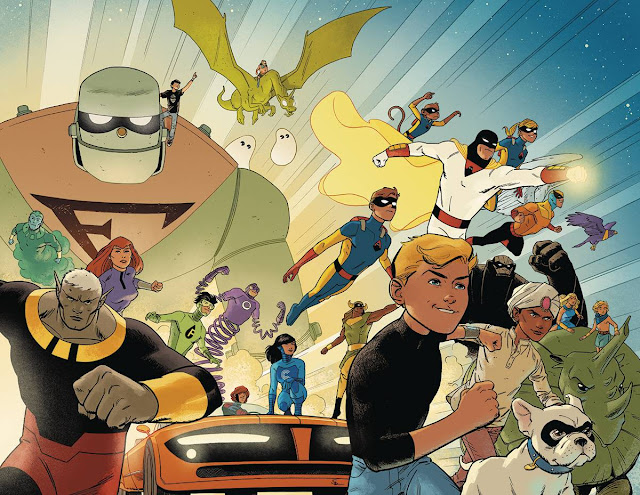 You can go home again: Jonny Quest, Hanna-Barbera cartoons are back in comic book geekland.
by rick olivares

The release of "Future Quest" from DC Comics has to be a feel good moment for comic book geeks like me this 2016.

"Future Quest" brings together those memorable cartoons from Hanna-Barbera including Bird Man, Space Ghost, the Herculoids, the Space Rangers and others into one comic with Jonny Quest as the book’s anchor. And the creative team of writer Jeff Parker and artists Evan Shaner and Steve Rude uncannily pull it off like some animation cells made it to the foul-color printed page. Reading the first issue elicited a smile, a broad one to be precise, from me. It had me running for my longbox and pulling out those old and treasured Jonny Quest and Space Ghost comics from the now defunct Comico.

When stories to do that to a reader then you know you have a winner because you've it appeals to something deep within you. It’s like that moment in Ratatouille when Anton Ego remembers sitting in his mother’s kitchen and  savoring his mother’s cooking. You get the drift.

Apparently I am not the only one. On the day of “Future Quest” #1’s release, current Spider-Man scribe Don Slott tweeted: "Read FUTURE QUEST and last week’s DOCTOR WHO this morning. Both were knocks right out of the park. Can’t recommend these comics enough.”

Jonny Quest was my James Bond. He was young Indy before River Phoenix gave life to Indiana Jones as a kid. Team Quest was way cooler than the Hardy Boys (just to be clear I was a fan of those teen detectives). The cartoon was sci-fi/adventure/mystery all rolled into one.

I was a fan of Race Bannon. In fact, I wasn’t sure who was more cool - Race or Modesty Blaise’s aide-de-camp, Willie Garvin.

The cartoon appealed to me just as Jim Steranko’s Nick Fury: Agent of Shield did (although minus the sexy women).

Yeah, I’m from Generation X and was weaned on Saturday morning cartoons, superhero comics, and comic strips of Modesty Blaise - now there’s a sultry and sexy strip that had me dreaming - and Prince Valiant.

So “Future Quest” was a nice homecoming. At first, I wasn’t so sure how the creative team would merge Space Ghost, the Herculoids, Bird Man, the Galaxy Trio, Mightor, and others with Jonny Quest. But they seem to have found a solution for this fanboy dream.

The Plot: The Space Force, sort of like an inter-galactic police force, are battling this energy being bent on destroying the world of Voranova. Their dying commander bequeaths a pair of power bands to their captain who joins the rest of the corps in a last stand. They succeed in stopping the energy creature but at the cost of their lives with only their captain the sole survivor. My bet is this captain is Space Ghost. The captain appears on the first page and if it is one and the same character, then in the last page for one heckuva cliffhanger.

It appears that this energy being has been attacking different worlds — Holy Shades of Crisis on Infinite Earths, Batman! And because of what happened, these worlds appear in different vortexes on earth that Team Quest is investigating. The Quests’ old foe, Dr. Zin, is monitoring the situation and believes that the vortexes contain sources of power that he craves in his pursuit of world domination. And it seems that everyone — all the various heroic and perhaps, villainous characters — from the Hanna-Barbera set are converging on earth for the mother of all showdowns.

I am like seven years old again. Great pacing, scripting. Lovely art and the colors by Jordie Bellaire make every panel and page eye candy. And like that kid I was eagerly waiting for the next episode, the next issue cannot come soon enough.

That’s what good stories do to you.

Future Quest #1 is out (sold out I believe) but I am pretty sure you can re-order from your favorite comic book specialty shop. And watch out because the second issue is due pretty soon.

Posted by Rick Olivares at 6:47 PM