I've got an old man's soul: My love for Dave Stevens' The Rocketeer 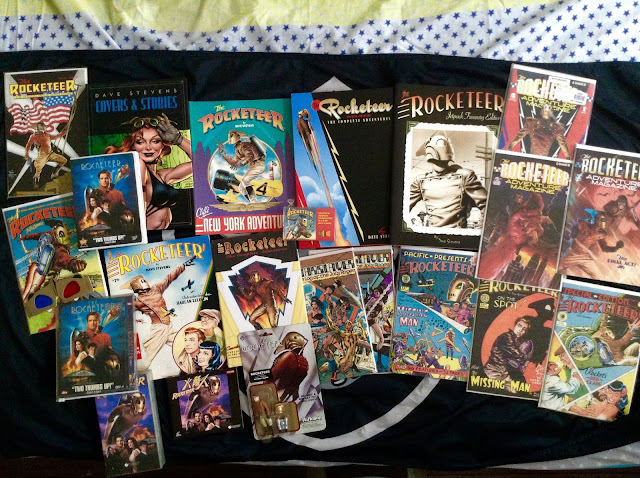 I've got an old man's soul.

I was born in the late 1960s yet I have had this eternal fascination for stories, films, books, and magazines of a bygone era -- the from late 1920s-60s America (you can throw in even French and Brazilian pop culture) and of course, my country, the Philippines.

My late grandfather influenced me because of the music that he played to the magazines he read and the films and actors that he enjoyed. Even as I discovered punk and new wave, I secretly loved the old big band jazz and rockabilly. I loved films like Casablanca, the first Back to the Future film, A League of Their Own, The Untouchables, Dick Tracy, Stand By Me, Road to Perdition, Streets of Fire, The Godfather and many more. My favorite television shows include Happy Days and Laverne and Shirley. My room had a poster of James Dean and when I was in college, I wore an oversized shirt of the rebel without a cause that made me look like a caricature (coz it was too big). 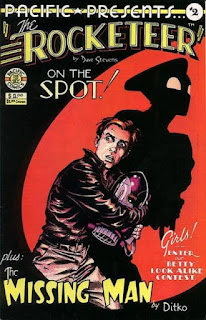 It was in college when I was rummaging through the bargain bins of BookSale when I came across Pacific Presents... The Rocketeer #2. I knew nothing about the character but the cover of a police spotlight on Cliff Secord holding that famous jetpack with a shadow of the Rocketeer behind him caught my immediate attention. I bought it and raced home to read it. I thought that Dave's art, was a throwback. It had the feel of the 30s yet with a modern sensibility. Furthermore, it was lush and dynamic. It was gorgeous. And so were his women. Plus, Dave singularly brought Bettie Page back into a global consciousness. How cool was that?

You could say that the book changed a lot about me. My own comic book -- Ang Ilog -- not only is that inspired by my childhood but also by Stevens. How does that work? Well, as Harlan Ellison later noted about the dialogue in The Rocketeer, it isn't 100% down pat from the era but the spirit is there. It is the same with my self-published comic. In fact, I also have a period piece about cops and robbers also set in that era. I have Dave to thank for that too.

Almost my entire collection from that time has been wiped out by fire and flood but that copy has stayed with me. That is how much I loved that comic about a down-on-his-luck flyer who was trying to win back his glamorous actress of a girlfriend. He was Peter Parker set in 1938. Except he had no super powers. Only his quick wit and a jetpack that he found that allowed him to soar in the skies.

When I was a kid, my grandfather would take me to the old Clark Air Base in Pampanga where we would sit on the grass and watch those old F-4 Phantom and F-104 Starfighters take off. It was a thrill for me and I wanted to become a fighter pilot never mind if I wasn't an American. I guess, it was the thrill of flying. That is ironic considering I suffer from acrophobia.

Reading The Rocketeer reminds me of my grandfather's house too that is decorated with so much Americana (he served in the US Army). He had a framed picture of the Wright Brothers' Kittyhawk that I coveted. There were stacks of magazines on the New York Yankees (he was a huge Mickey Mantle fan), Marilyn Monroe, James Cagney, and the like. I absorbed them all and became a fan as well. For years, I wanted to own my own Jukebox and I still do. I wanted to wear loafers, letter man jackets, and grease my hair.

It would be years before I added and completed my collection of Stevens' character. Every now and then I break them out and read them and it takes me back. I love the books like only a kid can. And these books along with Mike Baron and Steve Rude's Nexus are one of my most treasured in my massive collection.

Most of my friends cannot understand or relate to my fascination and love for the Rocketeer (and Nexus). Finding other folks who love them are difficult. As it is, I correspond with Americans who are of the same age as me who read the same books as I do. We talk, dissect, and wonder about its splendor.

I have an old soul and make no apologies for it.

And here is my collection of Stevens' work (not counting the new adventures done by modern creators).


I also have Stevens' non-Rocketeer work in Alien Worlds and his hardcover Covers & Stories.