Paul Bettany is enjoying his place in 21st century mythology 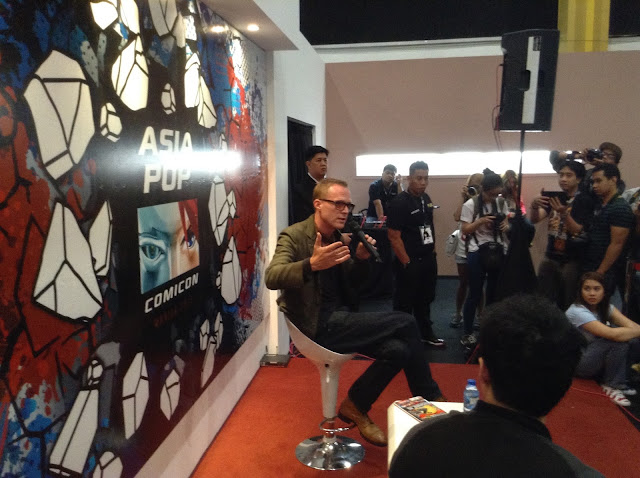 Paul Bettany stood just outside the media room that had a curtain that shielded him from anticipating eyes. In a few seconds he would meet members of the Philippine press for an early morning session.

Right before entering, the 6’3” English actor then softly said to no one in particular, “This is amazing.”

The second act of Bettany’s career is in full swing. Not too long ago, Bettany, married with three children, sat on the curb along Sunset Boulevard wondering “how to put food on the table” as he put it. It wasn’t like Bettany was destitute however after being told one’s career was practically over cast a pall on the man who played key roles in films such as “A Knight’s Tale,” “Master and Commander: The Far Side of the World,” “Wimbledon,” and “The Da Vinci Code."

Scarcely had Bettany sat down to mope when his cellphone rang  — it was a call from Joss Whedon who offered the role of the Vision in Avengers: Age of Ultron -- that started a remarkable turnaround for an actor’s career. “It’s was nice to know that I was going to have a few more films in the bag,” as he later remarked that was tinged with equal parts glee and relief.

Bettany was in Manila for AsiaPop Comicon, the first international comics convention in the country. He was introduced during a special sneak preview of the upcoming Captain America: Civil War where he was received by a thunderous ovation (Bettany also appears in the film). Kilometric lines snaked around the World Trade Center in Pasay City where thousands and thousands of fans came over for a four-day pop culture fest. And Bettany, was easily the star of the weekend. “I am amazed and humbled by that thought,” he said during the hour-long interview. “Going to conventions has put people like me in touch with the fans so we have an idea if they love our work or not. Happily, it is the former.”

While Bettany wasn’t weaned on comic books like many American and Filipino kids, he had this passing knowledge about them. He also incredibly admitted to not having seen his wife’s superhero genre films. Bettany’s wife, is American actress Jennifer Connelly who appeared in the 1991 film “The Rocketeer” and the Ang Lee directed “Hulk” in 2003 where she played Eric Bana’s Hulk/Bruce Banner’s tortured girlfriend, Betty Ross.”

“I haven’t seen her superhero films,” sheepishly admitted the English actor as the media heaved a collective sigh of shock at the revelation. “I’m not sure she’s seen mine,” he continued to stammer. "I haven’t seen many of the movies that I make. Jennifer’s seen even less of the movies that she’s in. My kids like them. She didn’t come to the premiere in Los Angeles (referring to Avengers: Age of Ultron). I was alone and miserable in the room and at the mini bar.”

Bettany previously appeared in the “Iron Man” and the first “Avengers” film as the voice of “Jarvis,” the semi-sentient program that runs many of the fictional Tony Stark’s programs and serves as his digital butler/sounding board, and ally. In “Avengers: Age of Ultron,” Jarvis finds form as the Vision after the villainous killer android Ultron hopes to turn the program against his master.

Yet in spite of this, Bettany said that he has a lot more respect for comics and the superhero genre today. “These are some of the highest grossing films in the world. They are a modern-day mythology that has become popular the world over and I am happy to be a part of it. And to be appreciated everywhere especially here in Manila, it is wonderful and I am grateful. The response by Filipinos is phenomenal. I’d love to comeback here one day with my family — not on business — but to have a look around."

Posted by Rick Olivares at 9:14 AM