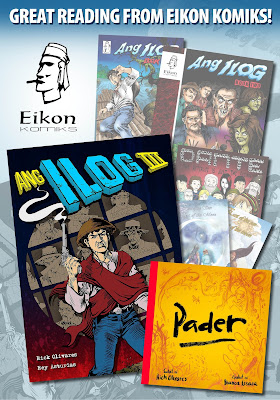 New stuff from me this coming Komikon!
by rick olivares

This coming November 14 and 15, 2015, I will be attending my third Komikon as an exhibitor.

I will be unveiling five new komiks under my personal imprint, Eikon Komiks, — Ang Ilog Book Three, East of the Sun West of the Moon prequel, K-Town #1, and a mini-graphic novel, Pader — during Komikon; the most I have done as a couple were delayed in their release during the August Indieket.

In my long career as a journalist, I have covered the police beat, written in the lifestyle and features section, ghosted on a few columns regarding politics and the high society life, reported on social issues from climate change to tragedies such as Payatas. It is in sports, however, where I cut my eyeteeth. The reward too, was writing several books that have done quite well.

While that is a tremendous accomplishment, my dream as a youngster was to write and draw for the American comic book market. The closest I have ever gotten to a page in any of them was seeing my letter printed in 12 comics so far.

And even as a youngster, I started making my own comics. Small ones that you were proud of as a kid but make you gnash your teeth in shame now.

Nowadays, it is more than ticking off items on my bucket list. It is making good on those dreams.

Now back to the titles… why the uncommonly large number of releases?

Truthfully, two of them were supposed to be released during the last Indieket — Ang Ilog Book Three and K-Town. Since they finally caught up in terms of production. So it isn’t so bad. 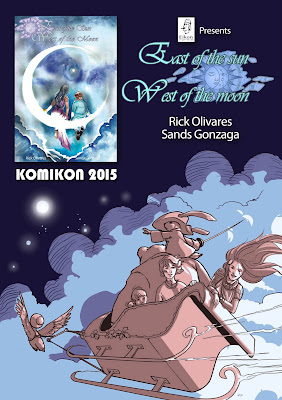 Ang Ilog Book Three, illustrated by veteran comic artist Rey F. Asturias, gives way to the vigilnte Lawin and the duo of El Vangador and Gabriela who do battle with some old foes of theirs who have gotten a supernatural boost. Rey used to draw for Atlas and GASI back in the day and did some ink assists on some DC Comics back in the early 1980s. Ang Ilog is a five-part historical fantasy that takes place in 1901 not soon after the Americans replaced the Spanish as

East of the Sun, written by Sandy Gonzaga, (the prequel) provides some of the backstory to this fantasy story of how the crew of the Iceblink Bluff got together. This high fantasy story pays homage to the works of JM Barrie (who wrote the story of Peter Pan), Hayao Miyazaki (who directed and wrote the acclaimed animated films like Nausicaa, Spirited Away, and Princess Mononoke to name a few), Tin Tin creator Herge, Star Wars creator, George Lucas, and the Norwegian fairy tale of the same name. I wrote this more than a decade ago while living in New York City and wrote long parts of it at Central Park. I completed the five-part story in Paris, France.

There is a strong European influence to the story and was produced in a very Bande Dessinee manner.

Pader, is a mini-graphic novel that owes its story to a real life series of incidents that took place some 12 years ago while working in a school in Brooklyn. The original story was about young boy named Maurice who told his life in a series of graffiti scrawls along Nostrand Avenue in Brooklyn. When I moved back to the Philippines, I re-calibrated it to a local setting. It is a combination of art and photography with moving and sensitive illustrations by newcomer Bianca Lesaca.

K-Town is a Korean version of the famed Scooby Doo Gang except it is set in Barangay Poblacion, Makati, that is home to the largest concentration of Koreans in the Philippines. Naturally, it is a wacky and hilarious tale as drawn by veteran illustrator JM Valenzuela.

The last is a mini-comic of a few pages of an upcoming comic titled, Dez, as drawn by the talented Ronzkie Pacho Vidal who writes and illustrates the magnificent Sulsi and Karit komiks. This one has more of a Gothic bent and owes its inspirations to Sarah Valentino and Ted Naifeh’s indie Goth classic, Gloomcookie.

Hopefully, you can check out these titles and more at the Eikon Komiks tables at the Komikon this November 14 and 15 at the Bayanihan Center in Pasig City.

Posted by Rick Olivares at 2:21 PM