Looking back at wedding stories in the Teen Titans, X-Men & the Hulk

While going through my comic book collection (whatever is left of it), I picked out three "wedding" stories and decided to read through them all over again and well, write about them.

Let's go through them in chronological order. 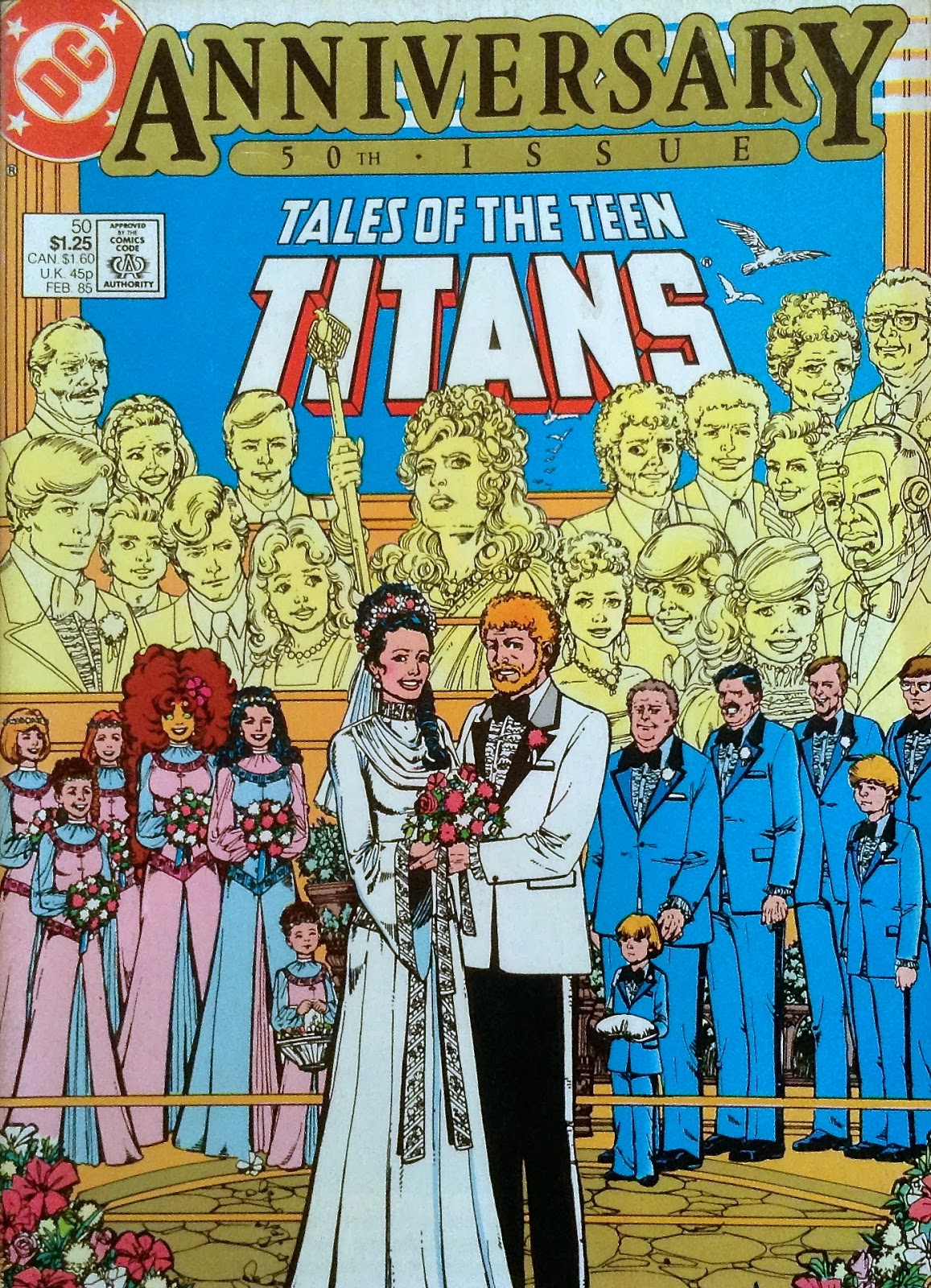 Tales of The Teen Titans #50 was released in December 1984 (with a February 1985 cover date) and was produced by its all-time tag team of Marv Wolfman and George Perez with Mike De Carlo and Dick Giordano as inkers.

"We are gathered here today" is a 40-page issue about the wedding of Donna Troy (Wonder Girl) and Terry Long, her history teacher boyfriend.

Writing. At this time, Teen Titans was the one title that rivalled X-Men (or was at least close to) in sales and popularity. Marv Wolfman had masterfully built up to this wedding/milestone issue. Even with the wedding day you don't know what's going to happen. With Changeling in charge of the wedding preparations you wonder if something will go wrong or that some super villain will attack. But no. It's perfect just the way a wedding should be.

When Wolfman opens with a scene from Paradise Island you wonder what's going on? Why has Hippolyta been secluded in the Temple of Athena for four days now in prayer? The answer will be made known towards the end of the issue and makes the finale all the more poignant.

Like any wedding day, it forces people to examine their interpersonal relationships. I always thought that the Dick Grayson Robin/Nightwing was perfect for Wonder Girl but instead he is giving her away.  The relationship between Bruce Wayne and Grayson more so their differences in character are magnificently told in six panels. The reunion of all the past and present Teen Titans although out of costume is wonderful. It's certainly cool when some of the old Titans ruminate about the benefits of opening a Titans West Coast. 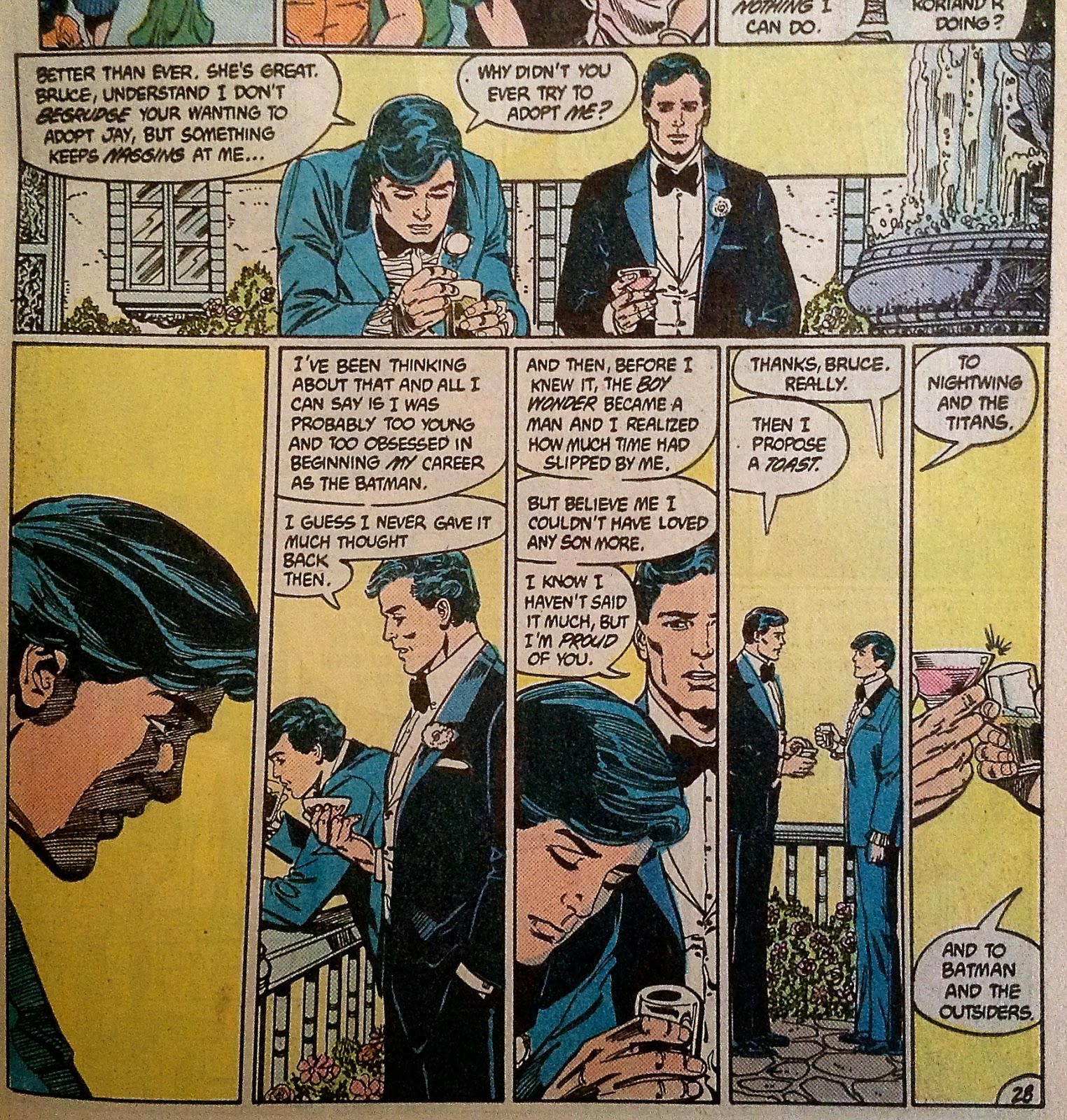 Tension.
All throughout the issue there are a number of sub-plots that threaten to destroy the solemnity of the occasion. Raven is absent for the wedding as she is in her dimension for meditating for the storm to come (Trigon). Steve Dayton (Mento from the Doom Patrol) uses his mental powers to project a different Vic Stone (Cyborg) and the half-man/half-machine resents Gar Logan attempt to make him appear normal. He tears at Logan verbally nearly spoiling the day but Stone's date sets him straight and he apologises for his being an ass.

Art. Two words. Or better yet. There is power in names and that is George Perez. So you know that you will not be short-changed and you will see gorgeously drawn women in here. For a while I thought his rendition of Diana Prince (Wonder Woman) was the best and that held true until Mike Deodato and Frank Cho came along. At a time when comic book artists paid close attention to panel art, George's use of the title "We Are Gathered Here Today" to make use as panels was an instant attention grabber. You know it was special.

Bride's gown. Ugh. Sorry. Donna's gown was too tightly wound that a librarian looks even more gorgeous. During the newlyweds honeymoon flight to Greece, she changes into her more traditional Amazon garb that caused Terry to drool. She should have worn something similar and more apt for the wedding ceremony.

Guests. Always been a fan of Aqualad and Aquagirl. I was heartbroken when Tula died in Crisis (about a year later). But it was good to see them here. Clark Kent and Lana Lang make cameo appearances. That's about it.

Nine years later there this other celebrated comic book wedding that was a long time coming. 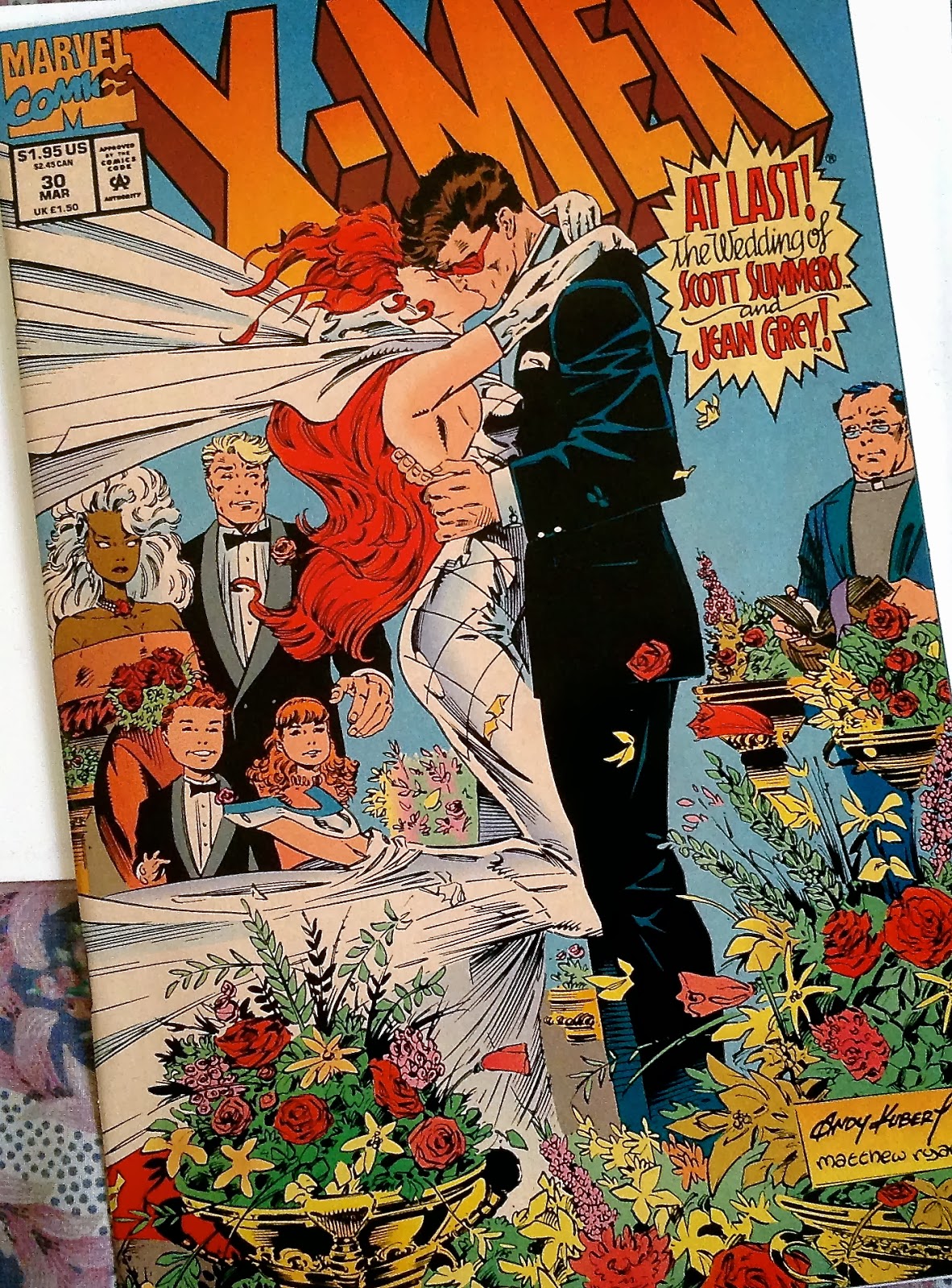 Writing. Nicieza I have to admit I wasn't a fan of. Tough act to follow in Chris Claremont. Furthermore, he had only 22-pages to work on so that meant he'd have to cut out a lot of scenes. If in Teen Titans, the entire wedding ceremony was shown here we'd only see bits and pieces. But handicapped and all, Nicieza does a masterful job with "The Ties that Bind".

I love the way how Nicieza started out the story with Wolverine's letter to Jean and Scott (he didn't attend because this was the post-Fatal Attractions storyline where his adamantium was wrenched from his body) then ended it with Charles Xavier reading Logan's short (pun intended) letter to him that was humorous.

Nicieza takes on the point of view of Xavier for the entire day. And why not? After all he was the crux in their early and young adult lives. He goes through the relationships of the original X-Men (Scott, Bobby, Hank, and Warren). With all the mutants in this issue, he gives some voice to the next relationships that will power the X-Men -- Alex Summer and Lorna Dane (Havok and Polaris) and Rogue and Gambit. Past and present X-Men. 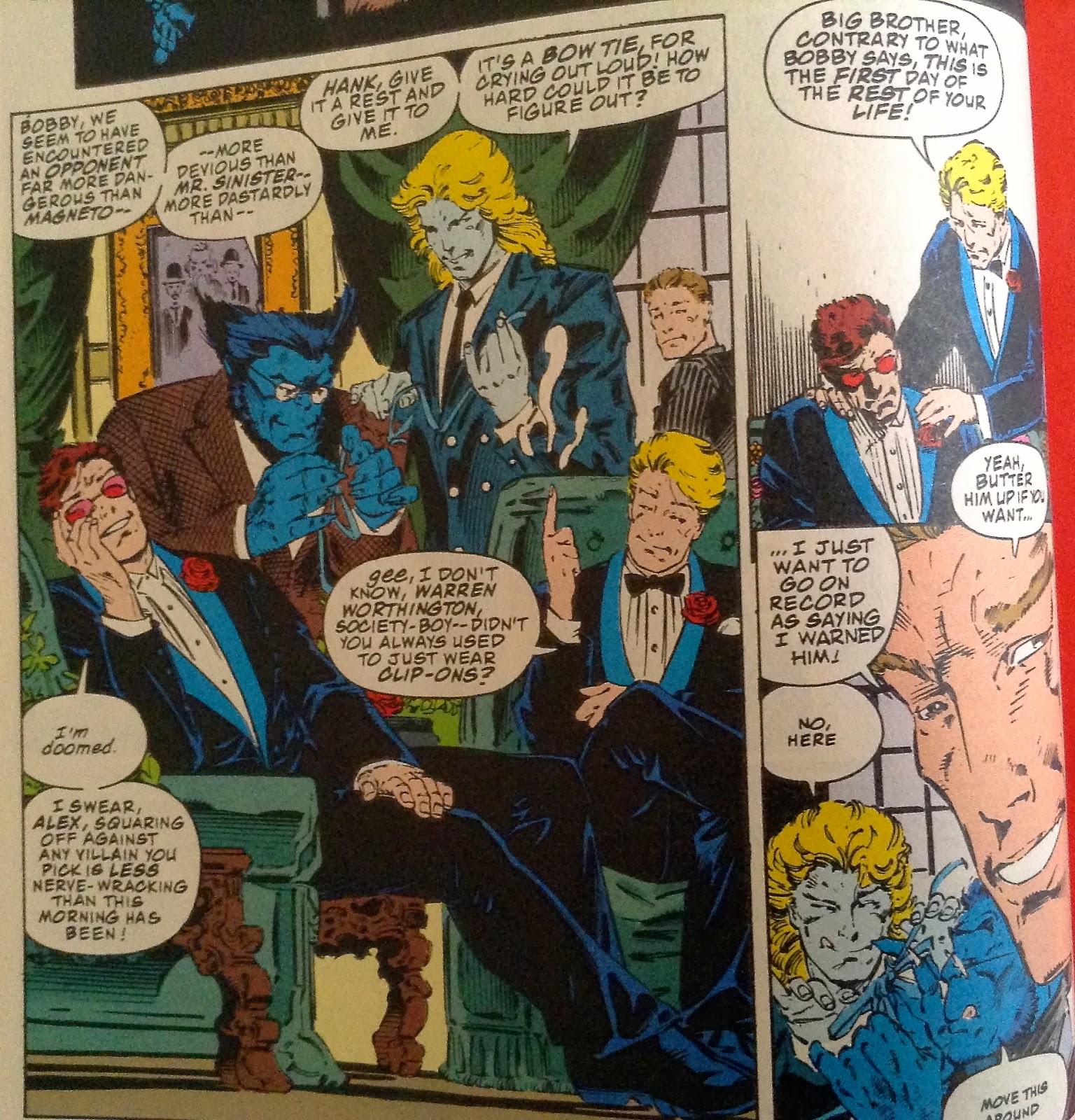 The scene where Jean Grey uses her mutant powers to lift up Xavier for a dance is a powerful scene. This is the Hippolyta moment of the issue if I may say.

Tension. As Cyclops notes, Havok is putting up a brave front after the apparent death of Jamie Madrox, the Multiple Man. Sabertooth nearly crashes the party but Wolverine makes the best non- cameo by going ninja on his nemesis by kicking him then leaving him a note to not even think about destroying the solemnity of the day.

Art. Jim Lee might be the ultimate X-Men artist but for my money, Marc Silvestri and Andy Kubert were stylish and terrific as well. And Kubert's drew one of his best works with "The Ties that Bind" as he does some amazingly detailed work that's packed with power". Check out the scene where Gambit beats everyone else to the bride's girdle and you'll see what I am saying.

Marvel went one farther on DC's Donna Troy's gown by actually asking a wedding designer Nicole Miller to design the strapless and silver gown Jean Grey gets into. This is actually the second time that Marvel engaged a proper designer for a wedding dress. The first was the late Willie Smith who designed Mary Jane Watson's gown in her wedding to Peter Parker.

In this issue, three trading cards commemorating the wedding are included! Nice touch!

Rating: I'd give the X-Crew an "A" for this issue.  I really wish there was more than 22-pages but they pulled it of. 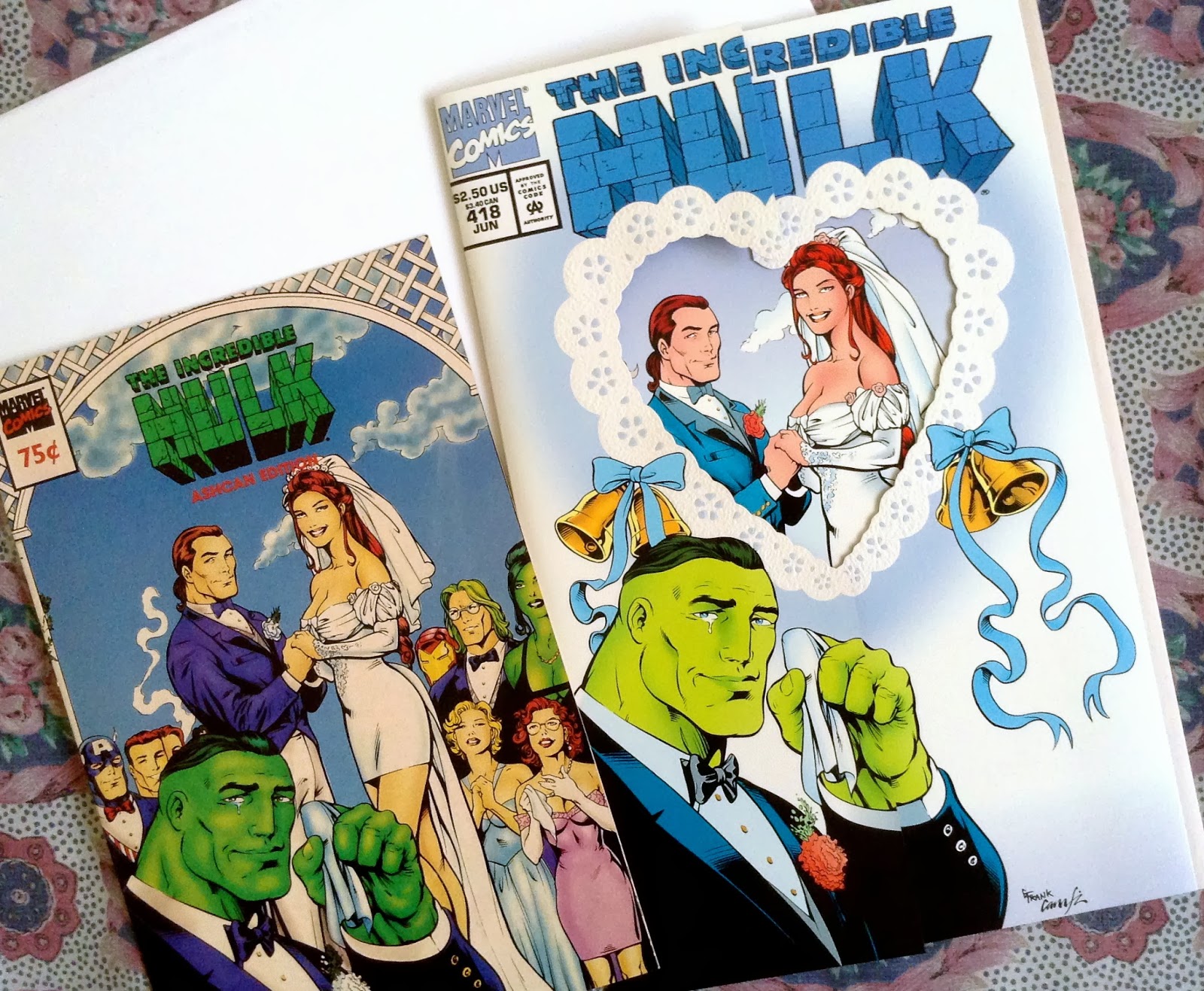 The Incredible Hulk #418 June 1994. Two Marvel weddings in one year! The cool thing is it isn't the main character of the Hulk getting married but long time supporting cast member Rick Jones and Marla Chandler! Yowza! Brought to you by the team of Peter David (writer), Gary Frank and Cam Smith (penciller and inker) for the similarly titled "We Are Gathered Here". Like the wedding of Cyclops and Marvel Girl, this one's 22-pages. But unlike that Marvel released a special ashcan edition that goes hand in hand with this.

The ashcan prints all the wedding gown designs by both Gary Frank and John Romita Sr! A comic book legend throwing in his lot. Imagine that! They also provide a glimpse of the guest list that is humorous for the side comments of both Bruce and Betty Ross!

It says do not seat the Pantheon next to X-Factor! Hahaha hilarious. No fish dinner for Namor the Sub-mariner. Bwahaha. The Human Torch needs asbestos napkins. Wahahaha. The Vision won't need a dinner. hehehehe. Iron Man -- keep away from the bar. This is too much and it's just the ashcan!

Writing. Now to the main comic book. Since this is Peter David expect there to be a heaping dose of humour. And how!

In the issue before the wedding, there's a bachelor's party for Rick Jones with Captain America, Ulysses (of the Pantheon), the Human Torch, the Vision, the Hulk, Iron Man, the Thing, and Quicksilver in attendance. They first have to go through as stripper that has Capall tied up. Then they watch an art film that is actually a prone film starring Marlo!

That sets up the tension for #418 when it opens with Rick and Marlo quarrelling. Cool thing -- there's a pic of Jim Morrison of the Doors in the background. This threatens to derail the wedding and as Marlo goes out to clear her head, she has an encounter with Mephisto who provides the tension for the wedding day. He tries to bargain for Marlo's perfect day in exchange for something that will be revealed later.

Tension. As if Mephisto isn't enough or even the Pantheon's internal bickering. Drax the Destroyer arrives. But it isn't for a fight with the Hulk but to attend the wedding. The Mr. Hyde, The Wizard, the Absorbing Man, and Living Lightning arrive to also attend the wedding. Then Rick says, Skrulls to the left; Kree to the right!" The two galactic rivals threaten to fight but the Silver Surfer intervenes and everyone behaves. Then lastly, Mephisto, due to the machinations of the Impossible Man, shows up finally threatening to undermine the ceremony but Hulk sends him packing to Limbo.

Finally, a wedding is held and the two are joined in union.

In perhaps the best cameo, the Endless' Death (from Vertigo) makes a cameo where she says that she'll go easy on Marlo (you have to read the back stories to understand this). 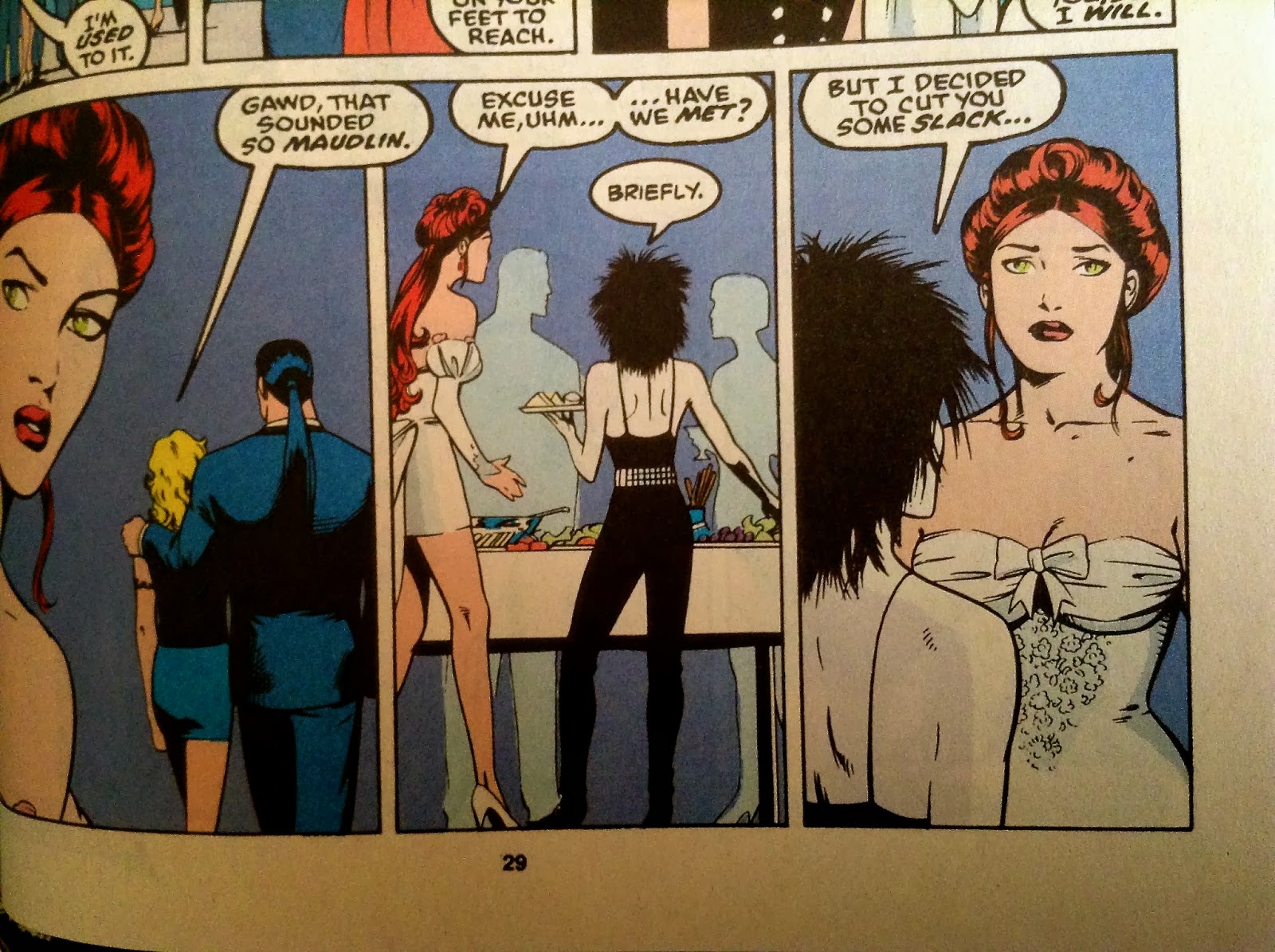 Art: The die-cut wrap around cover is worth the cover price alone! Seeing Captain America in a tuxedo is priceless. Peter David as the preacher who marries Rick and Marlo! Hilarious. And as always, Gary Frank does a great job especially with the facial expressions of the characters.

Rating: A+. The wedding's hardly much but everything else makes it perfect.