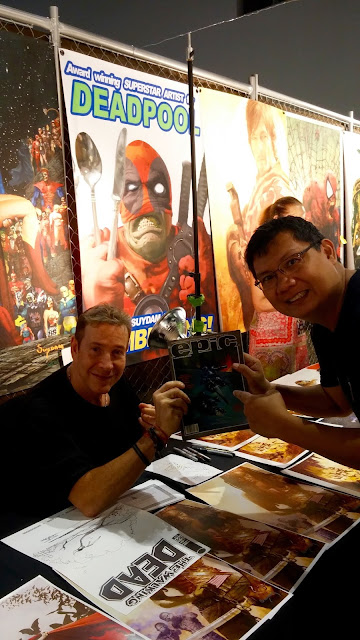 Tucked away in an alley with signs marked, “zombies” — where people posed next to statues of the undead for selfies and whatnot -- was a man who unbeknownst to the public has recently been associated with these reanimated corpses. He was American artist Arthur Suydam. To comic book fans today, he is known for his covers to titles such as Deadpool, Thor, Wolverine, X-Men, and perhaps the more popular title… Marvel Zombies. That limited series was written by the Zombie King himself, The Walking Dead creator Robert Kirkman with interior art by Sean Phillips (Incognito, Fatale, and The Fade Out all with that masterful writer, Ed Brubaker) and covers by Suydam himself.

Those ghastly covers of some of the world’s most beloved and recognized pop culture heroes were both haunting and powerful. And they were on display on his tables and the walls surrounding his zombie area of Toycon 2016 at the SMX Convention Center.

It was through another of Suydam’s post apocalyptic works where I became a fan.

I was in second year high school when Epic Illustrated published their 13th issue. Epic Illustrated was published by Marvel Comics as an answer to Heavy Metal magazine, the American version of that racy French mature comic that dealt on a variety of themes not touch on by their North American counterparts.

That particular issue was one of the best. It featured the black and white art adaptation by Al Williamson and Carlos Garzon of the Blade Runner that was shown in theaters a few months earlier. Rick Veitch, who would later come to fame working with Alan Moore on "Swamp Thing” and “Miracleman”, wrote and drew the fourth part of his space saga “Abraxas and the Earthman”. Spanish writer and artist Pepe Moreno had a short story of — yep, is this a coincidence or what — zombies in outer space with an eight-age story titled, “Survival”. The late Archie Goodwin wrote a medieval piece that was illustrated by painted by Mike Saenz.

Ironically, both Mike Saenz and Pepe Moreno produced two of the first computer-generated graphic novels one after the other. Saenz created "Iron Man: Crash" in 1987 while Moreno worked on "Batman: Digital Justice" in 1990.

The other story in that 13th issue of Epic Illustrated is perhaps the most popular one to emerge — “The Adventures of Cholly N’ Flytrap”, a series of stories about a duo of survivalists in a post-apocalyptic and absurd world where they are dressed up in World War I-type of clothing and fight for the sake of fighting. Cholly and Flytrap have appeared in Image Comics and have been re-published in trade paperback form in recent years for a new generation of fans to discover. And Suydam is just all to glad to be working on the comic book medium for four decades now.

I brought out my copy of Epic Illustrated and the 63-year old Suydam’s eyes lit up.

“So you have that. And I am sure you’re an old time comic book fan,” he said throwing out a fist bump.

We gabbed about life in New York City and New Jersey where he lives and where I once did too years ago. After exchanging pleasantries, talking about Bruce Springsteen, the Golden Age of Marvel Comics, and the Walking Dead, we got down to the interview.

Arthur: It has been great. I look forward to going out of town. I hear there are a lot of nice places. But right now, we’re here at Toycon. 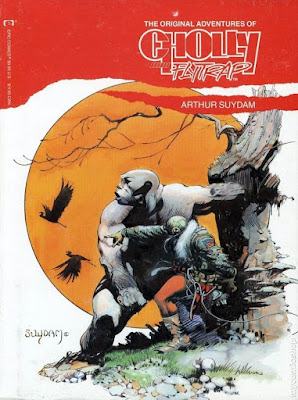 Rick: I understand that “The Adventures of Cholly N' Flytap” were supposed to be for Heavy Metal the movie.

Arthur: Yes, it was. I was commissioned to draw a character with some military trappings. I did but with a twist because he had this armadillo or turtle-like casing looking like a jet fighter pilot with lots of shell casings and riding a giant bat. Moebius was also asked to do the same thing but I think he already had something that he had come out with already (titled “Arzach” about a warrior who rode a pterodactyl-like creature in Metal Hurlant, the inspiration for Heavy Metal). The producers of the film came out with this sexy and buxom girl riding a pterodactyl-like creature so I guess we all know whose design came out the winner.

But I didn’t fret much about it. I still had my character who I liked and I developed it for Marvel Comics of which I am a big fan. Epic Illustrated was out and I just leapt at that chance.

Rick: Reading that first story — “The Rites of Spring — I felt it was like an anti-war story. In some ways it is. The Vietnam War ended something like seven years before but the effects were still being felt back home in the States. There’s a weariness to it. Cholly and Flytrap were up against some people who were trying to fertilize this barren world. So you know they drew the lines between good guys and bad guys.

Arthur: Yeah, you could say that. Mad Max came out around this time. And people were just hearing this term “anti-hero” and that is what Cholly and Flytrap were.

Rick: Well, Cholly and Flytrap have been a hit. Not a cult classic but a hit.

Arthur: It is nice to create something that people across generations really like. But I think today’s kids will know me for the Marvel Zombies. (laughter).

Rick: That must have been cool to work with Robert Kirkman.

Arthur: Yes, it was. Mr. Walking Dead himself! And he is quite talented you know. A visionary. See how Image Comics has done since he took over.

Rick: So what do you think about this zombie world and the return of horror as a genre in this world we live in.

Arthur: It’s great! There’s something for everyone. And for me. Not many people from my time in comics are still doing work today so I am not complaining. Am just happy. 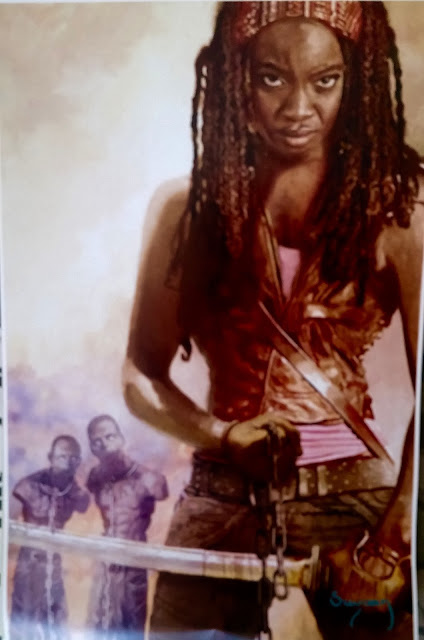