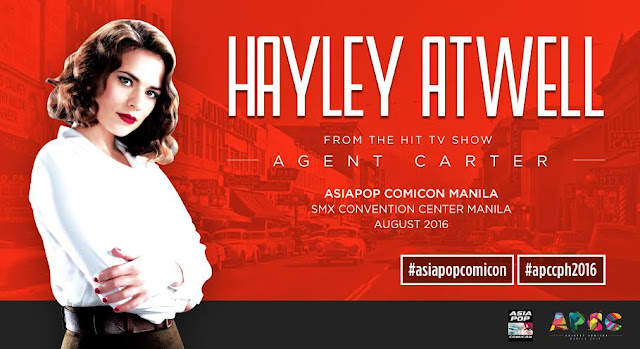 British-American actress Hayley Atwell was announced last Wednesday, June 15, as one of the headliners of the upcoming AsiaPop Comics Convention this coming August 26-28 at the SMX Convention Center at the Mall of Asia complex in Pasay City.

Atwell starred in two seasons of "Agent Carter", a spin-off from the widely popular Captain American films. Yet somehow, ABC did not renew the action-adventure show that was set in the late 1940s for another season. And that has resulted in a fan uproar with a current online petition to continue over at Netflix where Marvel Studios has had great success with “Daredevil" and "Jessica Jones".

She played Peggy Carter, Captain America’s romantic interest and the intrepid agent of the Strategic Scientific Reserve, the precursor to the fictional globe-spanning spy organization S.H.I.E.L.D. The show tied-in not only with the Marvel Cinematic Universe films like Captain America but also the television show, "Agents of S.H.I.E.L.D.” The first season was a critical and ratings success averaging some seven million viewers. The second season saw the viewership plummet to a little over four million viewers but critics, such as Variety’s Maureen Ryan, blamed that on “questionable scheduling decisions” and “lackluster promotion”. As critics of ABC pointed out, the ratings were slightly lower than “Agents of S.H.I.E.L.D.” that is also shown on the same network and rival “The Flash” on the CW Network and

An online petition on change.org was almost immediately started a fan from Spain, Arnau S., to bring the show over to Netflix. Since the petition began last May, 121,000 have signed; some 30,000 short of the its targeted 150,000. Atwell and the show were also recently prominently featured in three major comic book conventions in Dallas and Florida in the United States and in Blackpool, England a few weeks ago.

While Atwell became popular due to Captain America and Agent Carter, she previously made a name for herself as a stage actress. And post-“Agent Carter”, she is set to play a lead role in the upcoming legal drama, “Conviction”.

In last year’s AsiaPop Comicon, actors Paul Bettany (Marvel’s The Avengers), Nathalie Emmanuel (Game of Thrones), and Colton Haynes (Arrow) were some of the celebrities to grace the country’s biggest celebration of pop culture.

AsiaPop Comicon organizers said that there will be more announcements with regards to their comic, film, cosplay, and toy guests soon.

Posted by Rick Olivares at 8:17 AM