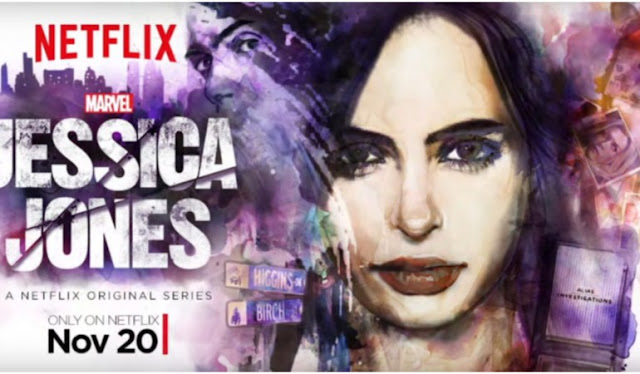 Jessica Jones, Marvel’s latest adaptation of a comic book hero into television, is a winner.

The 13-episode series available on Netflix, is just as captivating as previous Daredevil (they are set in the same universe and neighbourhood) series but in some ways more intoxicating as you take in the dark and dangerous world that the characters live in. You watch and are transfixed. You feel repulsed and sick with every plot twist and turn; the moral ambiguity blurring lines between the good guys and bad guys. As the skeletons in each character's closet is revealed, you are reminded that the world we live in isn’t just black and white as there are a lot of greys in between. And that is what makes Jessica Jones not only fascinating but perhaps the best shows on television.

Note that I didn’t mention the “S-word” and that is for “superhero."

It isn’t any secret that from the day that Marvel Comics first hit the stands in 1963, the creators strove to depict their pantheon of characters as if they lived in the real world. The Marvel Cinematic Universe has reinforced that and Jessica Jones, sans any cape and with only the occasional use of her super strength, comes across as a psychological crime thriller that deals with complex themes such as rape, post-traumatic stress disorder, and sexual assault among many others. Many of these scenes aren’t depicted at all but how the characters grapple with these issues is more than enough given the emotional scars they carry.

Krysten Ritter as Jessica Jones is particularly entrancing and intoxicating. Beneath the tough exterior is one vulnerable person who at times doesn’t make the right decision. She curses, brawls, swigs alcohol like it was water, and has great sex. But at the bottom of it all are her struggles between being a top private investigator and her thirst for revenge at Kilgrave who victimized her over a period of time.

Ritter turns in a terrific performance as the reluctant and complicated anti-hero, Jessica Jones. Even with that perpetual scowl on her face, she looks sexy and is a wonderful delight.

But Ritter’s lead character is given a run for her money as the star of the show with David Tennant’s chilling portrayal of Kilgrave, a villain who can control people with a mere word.

For the second consecutive Netflix Marvel series (Daredevil preceded this), the villain almost steals the show from the hero. It is hard to reconcile Tennant who is known to many today as Doctor Who with the psychotic Kilgrave.

In the comics version, Kilgrave is Croatian. The ethnic turn to go with British accent and charm of Tennant greatly adds to the nefariousness of his misdeeds. It turns out that beneath the suave veneer is a man who feels he was abused as a child is a heinous killer who ruins lives.

Kilgrave is given a glimpse of redemption when Jones forces him to do good and that adds to the torture of the viewer who may believe that criminals can redeem themselves. But that begs the question, how can monster like Kilgrave be kept on a leash?

The answer is you can’t. It is the nature of the beast. You still eliminate them because they are loose canons and isn’t as cut and dried as one would think. People wrestle with the results of their decisions and choices throughout the series.

Choices that all of Jones’ allies or pseudo-allies have to make at one point or another.

Michael Colter, who plays Luke Cage, Jones’ romantic interest and also a superhuman in his own right (in the comics version he is known as Power Man for his strength and unbreakable skin), spurs Jones when he learns that she inadvertently killed his wife. But later on, he returns to seek Jones’ help. Unlike Jones who knows what to do with her abilities, Cage doesn’t and that makes him a little reckless and that leads him to fall under Kilgrave’s control.

The rest of the main cast — Carrie Anne Moss’ Jeri Hogarth, Rachael Taylor’s Trish Walker, Eka Darville’s Malcolm Ducasse, and Wil Traval’s Will Simpson — are also complex characters who are more than just props to populate the show. Their lives are all intertwined and they too make questionable decisions whose effects send their individual plotlines careening into a car crash of a conclusion. If you read Marvel Comics’ you know that Walker becomes the heroine, Hellcat, while Simspon becomes the crazed patriot, Nuke, who becomes an unwitting pawn in a larger game that involves the Kingpin. So it is entirely possible that somewhere down the road before the “Defenders” — Daredevil, Jessica Jones, Power Man, and Iron Fist — unite.

There were moments when I thought that the 13-episode first season was taking too long and that I wished there was more than one villain to the show. But as it is, it turned out just right.

And thus, I do not need a verbal suggestion from Kilgrave to be transfixed by this gritty and wonderful series.

Like Daredevil that was a runaway hit and necessitated a Season 2, here's to more of Krysten Ritter's Jessica Jones.

Posted by Rick Olivares at 3:32 PM