Two Brothers, from Fabio Moon & Gabriel Ba, is a must-read 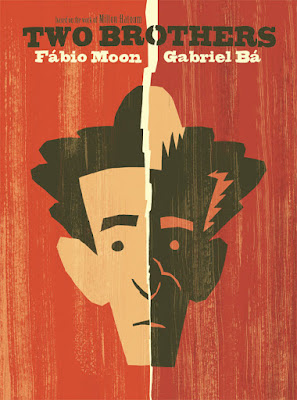 Two Brothers is a must-read graphic novel
by rick olivares

As soon as I read Gabriel Ba and Fabio Moon’s new graphic novel, "Two Brothers," an adaptation of their fellow Brazilian writer Milton Hatoum’s “The Brothers,” I put the book down and thought of S.E. Hinton’s “The Outsiders.”

In Hinton’s classic novel about rebels without a cause, there’s a chapter that explains how people scream for help but no one is either listening or willing to say what needs to be said.

Right before the rumble between Socs and Greasers, Randy, relates that the death of his best friend Bob was coming as he cruised the road to destruction. "They spoiled him rotten. I mean, most parents would be proud of a kid like that — good-lookin' and smart and everything, but they gave in to him all the time. He kept trying to make someone say 'No' and they never did. They never did. That was what he wanted. For somebody to tell him 'No.' To have somebody lay down the law, set the limits, give him something solid to stand on. That's what we all want, really. One time…"

And that is what “Two Brothers” — interpreted by brothers Fabio and Gabriel — is all about as well. Twin brothers Omar and Yaqub have the same physical features but are wholly different from one another. After one particular violent exchange between the brothers that partially disfigures Yaqub, the parents, Halim and Zana, separate them with the latter sent to live with relatives in Lebanon for five years. When he returns, the tension remains as the family deals with simmering issues of searching for an identity, love, loss, selfishness, deception, and the dissolution of blood ties. The result is a life of regret and of words said and left unsaid.

In the book, there are no heroes and villains. You pull and hope for things to be all right. Alas, everyone makes decisions that eventually hurt one but ultimately affect everyone else. There are moments when one can do something to rectify the situation but the inability, willingly or unwillingly to address the concerns, finds the moments passing; thus, paving the way for an ending that greatly tugs at your heartstrings.

It’s a powerful and moving story similar to Moon and Ba’s earlier masterpiece, “Daytripper,” that essentially seize the moment. “Two Brothers” is the opposite. They channel Hinton’s Outsiders when parents choose to allow the moments to pass like ships in the night. And in doing so, the sins of the parents live on in their children.

Unlike “Daytripper” where Brazil’s festive atmosphere comes to life in colorist Dave Stewart's gorgeous palette, “Two Brothers” is wholly in black and white and takes place in the port city of Manaus that was front and center to all the upheaval’s of the world’s fifth largest country.

While one wonders how it would fared with Stewart’s sensitive touch, the black and white feels like everything is one big trip down memory lane which it is as the story is narrated by Yaqub’s unnamed bastard son. The black and white art forces you, the reader to make a deeper commitment to the story as you take in every panel just as you savor every morsel of the prose by these talented brothers.

Whether you are a fan of the work of Fabio Moon and Gabriel Ba or just love poignant graphic stories that leave an impression on you, then welcome “Two Brothers” — stirring and bittersweet — to your essential reading family. 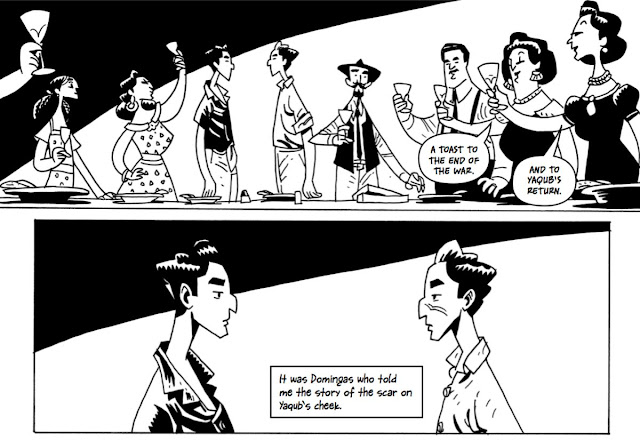 Posted by Rick Olivares at 6:32 PM