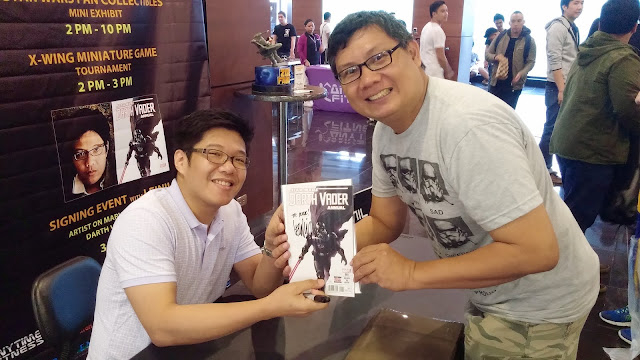 The adventures of beloved characters from a galaxy far far away are now being drawn by someone not too far away.

Filipino comic book artist Leinil Yu, who has drawn such high-profile comics such as Civil War and Wolverine for Marvel, Superman: Birthright for DC, and Superior under Icon to name a few, will be working on the Star Wars comic beginning February 2016.

"I think my coming onboard is very timely,” said Yu who was all smiles as fans crowded the Promenade Hall in Greenhills for Star Wars Saturday. "I was supposed to do a Han Solo book then they (Marvel) switched me over to the main Star Wars series. But before I could really begin work on Star Wars, they asked to do the Darth Vader Annual. Now I didn’t know that the Darth Vader Annual was coming out during the opening week for 'Star Wars: The Force Awakens' so that made it pretty cool.”

Yu admitted to be an old-time Star Wars fan and the new pencilling gig is a dream come true for him. "Drawing Star Wars is something I said yes to immediately. Why not? Who doesn’t love Star Wars? You’re talking about Han Solo, Darth Vader, the cast and crew that we grew up with in the main book. What is not to like? However, if they asked me to do a Jar Jar Binks mini-series that’s another thing."

Han Solo, arguably the most popular of the Star Wars characters, is Yu’s favorite. Yet the artist admitted that he hasn’t gotten a full grip on all the characters just yet. “It’s one thing to enjoy them on film as a fan and it’s another to draw them. I just started working on the characters so I haven’t figured them out. You can say that I am still getting to know the characters better.  It usually takes me a couple of issues before I get into the groove of the book I am working on. But so far, I like drawing Han and everyone. The cast is so diverse it’s fun for me. It’s also a test to what I can do with this icon of a franchise.”

"It’s being solicited for February but I am still working on it. It’s harder because it’s the Christmas season."

Regarding ’Star Wars: The Force Awakens,’ Yu said he loves it. "I love it. I had high expectations because it is JJ Abrams. But I have some reservations as a fan though. Nevertheless, I enjoyed it and look forward to watching it again."
Star Wars Saturday was organized by Filbar’s and the alliance of pop culture stores thoughout Manila.

The Star Wars franchise returned to Marvel this 2015 when Disney purchased Lucasfilm Ltd., ending close to two decades run under Dark Horse Comics. It was Marvel that originally published Star Wars concurrent to the original film’s release in May of 1977.