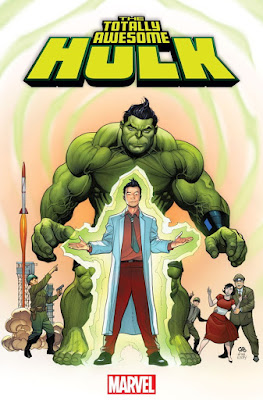 One thing I love about Marvel’s recent direction is that it has made comic book reading fun again. The Silver Surfer by Dan Slott and Mike Allred is the spiritual heir to Mike Baron and Steve Rude’s Nexus with every issue is a joy to read. G. Willow Wilson and Adrian Alphona’s Ms. Marvel channels the voyage of discovery and wonder of the old Lee-Ditko Spider-Mans. Doctor Strange and Spider-Man, some of the old boys on the block have become even more interesting reads. And for another new spin on an old yarn? Welcome to Greg Pak and Frank Cho’s Totally Awesome Hulk.

When the Hulk first debuted in the 1960s, he was the anti-thesis of Peter Parker’s Spider-Man — with great power comes great vulnerability. True enough, creative teams over the decades have focused on the warring personas of an emotionally fractured Bruce Banner.

He’s been a hero, anti-hero, gangster, a part of organizations like the Pantheon, Shield, the Avengers and the Defenders. He’s also gone Russell Crowe in another planet. And even become the villainous Maestro. Is there anything else to mine?

Enter Amadeus Cho, the young genius who became an ally of the Hulk some time ago who now become the Jade Giant at will. Not like the “What if Rick Jones became the Hulk?” feature that was published in 1978 (written by Dan Glut and drawn by Sal Buscema and Bill Black). Except in the first issue of Totally Awesome Hulk, there is a hint of danger about Amadeus losing control where the natural antagonistic and violent tendencies of the Hulk take over.

I remember during the great run by Peter David and Dale Keown where the Merged Hulk featured the savage and smart Hulk with the face of Banner. Eventually, the savage side resurfaced.

Can one really tame the beast?

That’s for down the road. In the meantime, Amadeus Cho revels in being the Hulk, a superhero, and a teenager with raging hormones all at the same time. This tons-of-fun version of the Hulk fights monsters, eats like there’s no tomorrow, and flirts with pretty women.

I love the Korean-American characters of Cho and his sister Maddy who have been around for a while now. I am not particularly crazy about the diversity in comics today that seems to be contrived more than a natural progression. With Cho through the years, we’ve seen him as a version of Hercules, the Prince of Power, and now is the Hulk. I’d say, it is well justified.

Pak has always written engrossing tales while Cho’s art is always playful and gorgeous. The Kaiju uprising is a storyline worth watching out as well as the latest development surrounding Bruce Banner. And while I am concerned about the Savage Hulk taking over Cho, I too wonder if Cho can pick up the quick pace of All-New, All-Different Marvel.

Totally Awesome Hulk with one issue is a one of the highlight’s of the week’s pull list. Check it out.