What do I think of Marvel's All-New All-Different line? 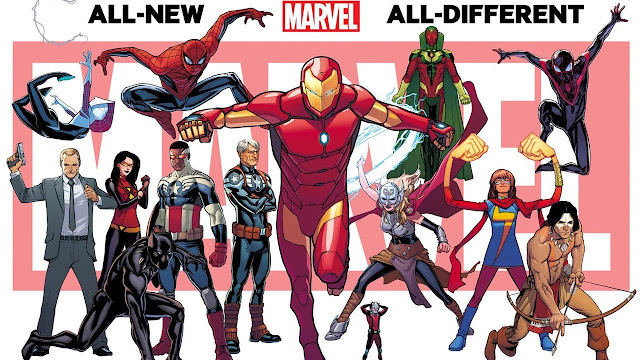 What do I think of Marvel's All-New All-Different line?

I am really not convinced. A lot of it seems contrived. I dislike their approach to diversity where it feels contrived rather than natural.

I won't even touch on how they have destroyed the Fantastic Four and X-Men. But I will say this about the mutant line -- I do not buy Iceman being gay after all this time. This is so much bullshit. Why not just come up with a character and make him gay? I have no problem with LGBT characters as long as it is done naturally rather than foisting these established characters who suddenly aren't who we thought they were.

I really cannot get into what they have done to the mutant line. It used to be the industry best-seller. Now, they're full of shit. I can only compare them to the time when Jeph Loeb took over the Ultimates from Mark Millar and Bryan Hitch and turned it into a Image superhero comic circa early 1990s.

Furthermore, I also do not buy Sam Wilson as Captain America. Everyone wants to be say Kobe Bryant or even LeBron James but they end up being themselves. Listen to Kobe or LBJ; they all say they aren't Michael Jordan but themselves. In line with that logic, why can't Sam be simply the Falcon and give him the push he deserves rather than be Cap? And what's with Jane Foster as Thor? Why can't she just be another hero? Why is Thor suddenly a wimp who gets his ass kicked by Angela and everyone else?

I get the feeling that changes in characters, revealing one is gay, or ethnically diverse is just to get the comic featured in some non-industry magazine or CNN.

Look at the All-New All-Different Avengers line-up? I love Kamala Khan and have purchased every single Ms. Marvel comic including the Christmas Special but she doesn't belong in the Avengers. The Avengers are supposed to be Earth's Mightiest Heroes and now we have the kiddie brigade joining their ranks. It used to be almost an exclusive club but not they just let about anybody in. Wolverine is not the profile for what an Avenger should be. Ditto for Deadpool. So why the hell does Logan pop his claws or Wade bring a gun? The new book is nothing more than a sales gimmick. What's with the New Avengers?

Hawkeye has gone from one of the coolest comics to one that has lost its lustre. Look. Go in another direction. Stop trying to ape Matt Fraction and David Aja who are already off the book.

Is there anything that I like from the ANAD line?

Amazing Spider-Man with Peter Parker suddenly finding himself awash with money is pushing the story forward. The days of his financial woes are done and beaten to death even if it had to be poorly revisited following the events of One More Day. I love how the Prowler is now an aide de camp or even -- to borrow a WWE term -- a "stunt double."

Doctor Strange is one of the best right now even if Stephen Strange is channeling his inner Tony Stark.

The new armor of Stark in Invincible Iron Man makes sense. Am just not crazy about the reveal that his isn't a true Stark (what a bullshit plot line interjected by Kieron Gillen during Marvel Now). Am just surprised they have a second Iron Man title coming up. Hey, aren't sales down that you have to come up with another?

Here's the the list of ANAD that I get:
Amazing Spider-Man
The Astonishing Ant-Man
Doctor Strange
Invincible Iron Man
All-New All-Different Avengers (I get this because of Kamala Khan and am trusting Mark Waid to turn out good stuff).
The Mighty Thor (As much as I do not like Jane Foster as Thor, Jason Aaron has done a great job with his run and am trusting him on this)
Moon Girl and Devil Dinosaur (bears further watching to see where they take this)
Ms. Marvel
Daredevil
Totally Awesome Hulk
Silver Surfer


I hope Marvel stops their endless reboots and event-books that really don't do much. Secret Wars was one of the better ones except that it is really late. It went from an eight-issue limited series to having a ninth issue. WTF!

The saving grace for it is Esad Ribic finished all the art chores instead of farming it out to another artist.

What has changed for me in terms of my buying habits for Marvel and DC? I only get runs now. If I like the creative team I get the issues. If the team changes, I drop the title. Loyalty is out of the window for me since Marvel and DC have not reciprocated.

It is easy to say that my tastes have changed. Not true. I read a lot of the new stuff and there's a lot that's good across the various publishers major or indie. My point is all about consistency, being respectful of the characters, and quality product.
Posted by Rick Olivares at 9:58 PM