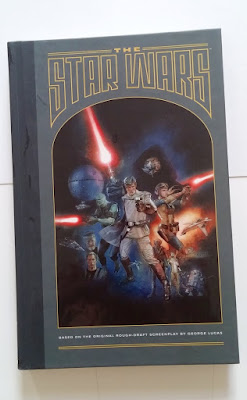 Picked up the hard cover edition of "The Star Wars" from Dark Horse Comics. "The Star Wars" -- written by J.W. Rinzler and illustrated by Mike Mayhew -- is the comic book adaptation of the original draft of George Lucas penned before the final draft that turned out to be A New Hope. It has some similarities but it is mostly different. The creative team didn't have any designs to work with when they undertook the project but they did use some of the early designs by the late Ralph McQuarrie whose designs and storyboards was what sold 20th Century Fox on the film.

You have to divest yourself of what you know when reading this. It's kind of difficult but if you do so it's worth the read.

The deluxe edition collects the eight issues that was released in 2013 along with Mayhew's designs, notes, and variant covers.
Posted by Rick Olivares at 2:30 PM